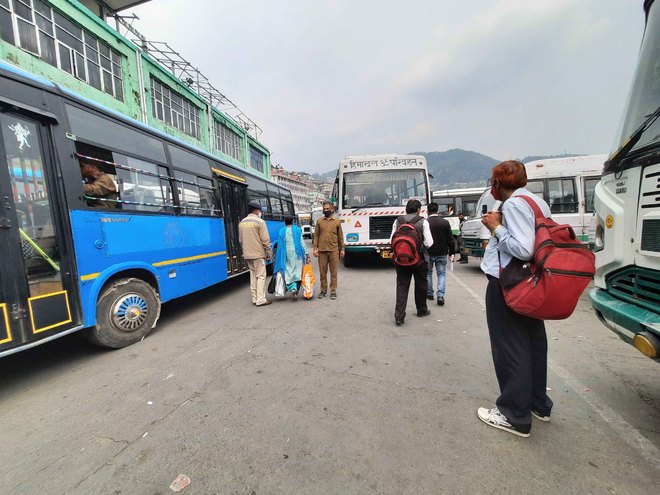 Commuters left in the lurch as private bus operators observe a strike in Shimla on Monday. Photo: Amit Kanwar

“Barring a few buses in Kangra, the strike was 100 per cent successful in all other districts. Our entire fleet of around 3,500 buses stayed off the road,” said union’s state president Rajesh Parashar.

Meanwhile, some efforts have begun at the government level to make the private operators call off the strike. “We will have a high-level meeting tomorrow morning to find some solution,” said a senior government official.

With Himachal Pradesh Road Transport (HRTC) also not plying buses on all its routes and private operators taking all their buses off the road, the general public faced problems at different places.

“As people have restricted their travel because of the pandemic, the strike did not cause much problem to the public. Yes, people faced some problem during peak hours, but we couldn’t have helped it,” said Parashar.

Meanwhile, the HRTC has asked all its depots to run additional buses to ensure people did not face much inconvenience because of the strike. “In the urban areas, we didn’t see much problem because HRTC increased its buses. But in the rural areas, where only a handful of HRTC and private buses play, people did face problems. In many buses in rural areas, overcrowding was also seen because of the shortage of buses,” said Kaushal Mongta, a zila parishad member from Saraswati Nagar, Rohru.

Toughening their stand further, Parashar said if their demands for the exemption of road tax and grant of working capital were not met in the next couple of days, the union start taking measures like hunger strike.

“We could also start burning down the buses in case the government doesn’t lend a helping hand to us,” he said.