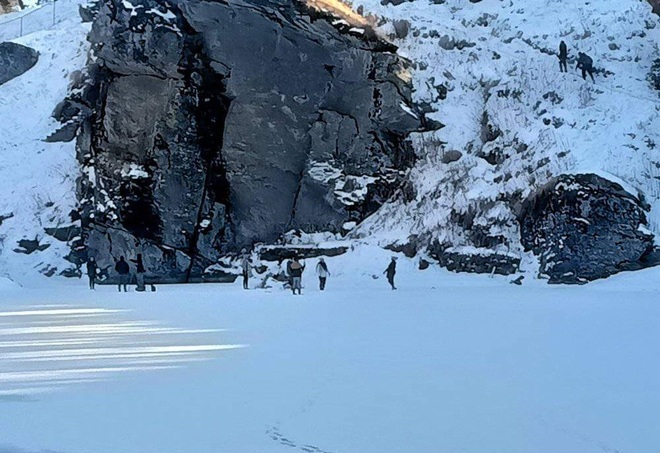 Tourists walking on the frozen Seolsar lake in Kullu.

Photography and walking with shoes on the frozen religiously significant Seolsar lake, located at an altitude of 10,280 feet, has been banned after some pictures of tourists wandering wearing shoes on the frozen lake went viral on the social media. The lake is spread over a diameter of about one kilometer and is approachable on foot from Jalori Jot on the border of Banjar and Anni subdivision.

Devotees from all over the country and abroad come here in large numbers. After the fulfillment of the vow, people take off their shoes and drink holy water from the lake. The lake is worshiped by offering incense and flowers.

Rinku Singh Rana, Kardar of Budhi Nagin Mata temple located in Seolsar, said that the temple committee has banned photography and walking over the frozen lake from today. The lake has mythical importance and is sacred. The decision has been taken in view of the religious belief, he said and appealed to the local people and guides associated with tourism to give instructions to their guests so that the sanctity of religious places was not compromised.

Rana said that recently it came to the notice that tourists who came along with local people entered the frozen lake for their entertainment with shoes and did photography. The temple committee has expressed displeasure over violation of the deity tradition. He said that this had hurt the religious sentiments of thousands of devotees of the Anni, Banjar and Mandi area.

The temple committee has warned that it will be forced to take strict steps if anyone violates the ban.

The residents said that this could result in a mishap if the layer of the lake is ruptured. Sunil and Suresh, local residents, said that all the people associated with tourism business should apprise the tourists about the customs and culture prevalent here so that religious sentiments of people were not hurt.

Banjar Sub Divisional Magistrate Hem Chand Verma said that the administration would take action against erring tourists as per rules.