Stuck in snow, 50 rescued from Himachal's Chopal : The Tribune India 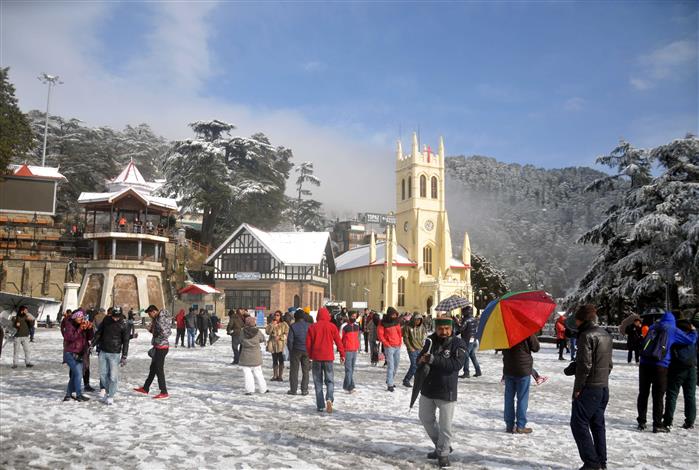 Tourists and locals enjoy snow at The Ridge in Shimla on Saturday. Tribune Photo

Shimla donned a white mantle as intermittent snow and sleet continued but it did not last long. The sky was heavily overcast and thick fog engulfed the city, reducing visibility and disrupting vehicular traffic. 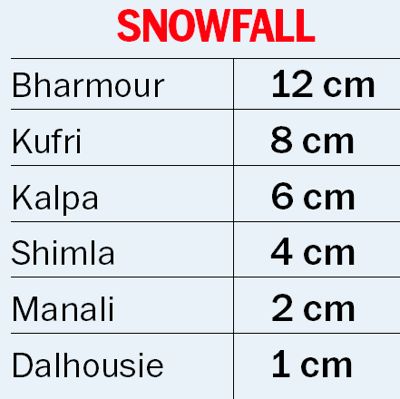 The Shimla police have advised commuters to take caution while driving as a large number of roads are slippery. Dense fog engulfed the region and icy winds lashed mid and high hills. Bharmour received 12 cm of snow, Kufri and Khadrala 8 cm, Kalpa 6 cm, Shimla 4 cm, Manali 2 cm and Sangla and Dalhousie 1 cm each.

As many as 271 roads (143 in Lahaul and Spiti, 43 in Shimla, 36 in Chamba, 24 in Kullu, 17 in Mandi, seven in Kinnaur and one in Solan district), were blocked while 22 transformers were hit and nine water supply schemes were disrupted.

Keylong and Kalpa in Lahaul and Spiti and Kinnaur districts recorded a low of minus 6.3 degree and minus 3 degree Celsius while Kufri and Dalhousie shivered at minus 0.4 degree each, followed by Manali 0.4 degree and Shimla 2.6 degree C.