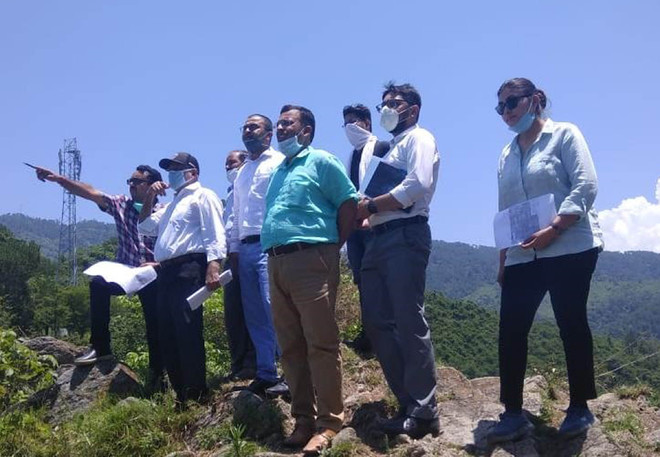 A Central team at the proposed airport site in the Balh valley, Mandi, on Monday. Jai Kumar

A six-member team from WAPCOS Limited today visited the site in the Balh valley where an international airport is proposed to come up. It will now prepare a detailed project report on the ambitious project.

The company is an accredited public sector enterprise under the aegis of the Union Ministry of Jal Shakti, Government of India.

The team was assisted by the Mandi administration to conduct a detailed survey of this proposed greenfield airport. The team members visited different locations of the site to prepare a ground report on this project.

It is the dream project of Chief Minister Jai Ram Thakur, who wants to execute it as soon as possible to promote high-end tourism in the region.

Amid the Covid-19 pandemic, all development works have come to a halt. However, with the nation now in the unlock phase, the state government is planning to give impetus to development projects across the state.

Pankaj Sharma, District Tourism Officer, Mandi, said. “The team will now prepare a detailed project report on the proposed airport and submit the same to the Centre and the state government.”

Deputy Commissioner, Mandi, Rugved Thakur said, “It is an ambitious project of the state government and it is making all efforts to fast-track progress.”

However, the government was facing several hurdles as a vast tract of the fertile land in the valley was coming under this project.

The residents of Balh valley are opposing the move of the state government.