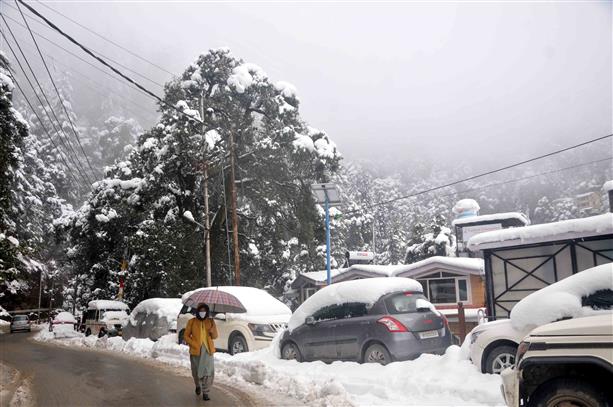 Thick fog engulfed Shimla city and its surrounding areas amid drizzle, sleet and traces of snow affecting normal life today. Shimla and Kufri received 15 cm and 14 cm of snow and visibility was reduced to a few metres during morning hours.

A large number of tourists were seen enjoying snow and dancing on The Ridge and taking a stroll on The Mall Road. Due to the heavy rush of tourists, traffic jams were witnessed in several areas, including the Tara Devi-Kachi Ghati stretch and the Lift in the city, and vehicles moved at a snail’s pace.

Upper Shimla areas were inaccessible by road till afternoon as continuous snowfall at several places made roads slippery. However, the Theog-Chopal, Shimla-Rohru and Shimla-Rampur roads and the Kufri-Fagu stretch of the Shimla-Theog road were open for vehicular traffic, said Deputy Commissioner, Shimla, Aditya Negi. All roads in Shimla city were also open. However commuters should take precautions while driving on stretches on the hill shade side, he added.

The Theog-Chopal, Shimla-Rohru and Shimla-Rampur roads have been opened for traffic. Commuters must take precautions while driving. —Aditya Negi, DC

The local Met office has predicted rain and snowfall at isolated places in mid and high hills tomorrow and a dry weather January 26 onwards. Keylong was the coldest at minus 9°C.

The famous tourist resorts of Kufri recorded a low of minus 3°C, Dalhousie minus 2°C and Shimla

and Manali both zero degree. Una was the hottest at 14.6°C.