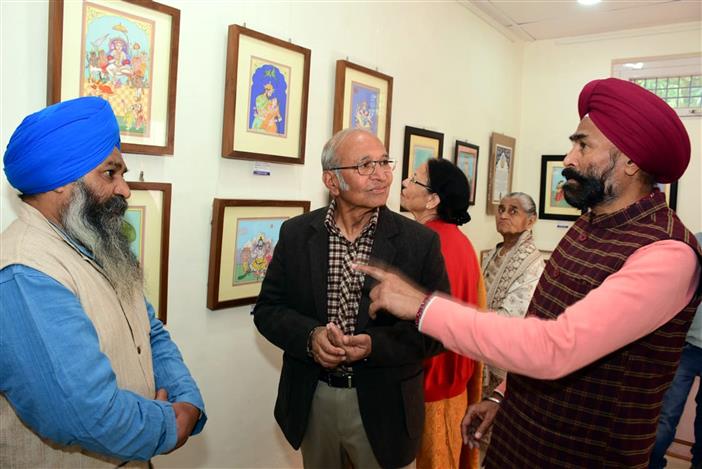 Visitors view miniature paintings on the last day of the the Sobha Singh Art Festival at Andretta village on Tuesday.

The three-day Sobha Singh Art Festival concluded at Andretta village today. An exhibition of miniature paintings made using gold and natural pigments by Gurpreet Singh Mankoo of Jagraon in Ludhiana district of Punjab was displayed at the artist residency of the Sobha Singh Art Museum.

Hirday Paul Singh, Secretary General, Sobha Singh Arts Promotion Society, said it was the first exhibition in the state, where Mankoo had integrated Vijaynagar (Karnataka) and Kangra styles of depicting gods and gurus.

The art festival organised after two years due to the pandemic has once again brought to the fore the demand for the declaration of Andretta as an art village.

Local resident Satish Sharma says Andretta has been an art village since 1947 as artists like Sardar Sobha Singh, Norah Richards and Gurcharan Singh had stayed there. Thousands of tourists come to the village every year to see the work of legendary artists. However, the government has not promoted it as an art village. If the village is promoted as an art village, it will attract more tourists and create employment opportunities for locals, he says.

At the concluding ceremony, art connoisseur KL Vaidya was awarded the Sobha Singh Kala Puruskar, comprising a citation, shawl, cap and Rs 21,000. A set of 18 view cards on famous paintings of Sobha Singh was released to mark his birth anniversary.