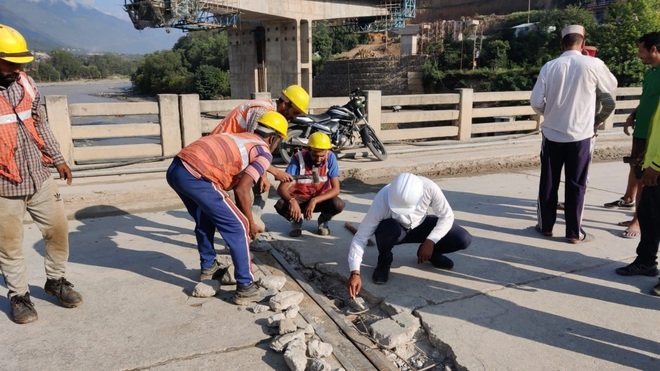 Engineers take samples of the damaged portion of the Bajaura bridge on Monday.

The bridge connecting Bajaura to Gadsa valley has suffered damage. The vehicles heading towards Gadsa are being diverted from Bhuntar resulting in traffic jams on the narrow bailey bridge in Bhuntar.

A resident Gautam said that the bridge connects nine panchayats of Garsa valley and heavy tippers and dumpers also use this bridge. He said that bridge was built by the NHPC for its Parbati Hydro Electric Project in 2001 but no maintenance was carried out since then due to which the bridge was getting damaged. The concrete had started wearing out from a portion of the bridge and a plate had been damaged.

The residents demanded that proper repair work of this bridge should be undertaken otherwise the possibility of a major mishap can’t be ruled out. The residents said that the people going to Gadsa valley were using this bridge. They urged that the authorities concerned should carry out regular monitoring and maintenance of the bridge to ensure uninterrupted flow of traffic.

Kullu PWD Superintending Engineer KK Sharma said that the work of repair of the bridge has been started and traffic via the bridge would be restored soon.

Meanwhile, some residents raised questions on the quality and designs of the bridges being built in the state. They said that some bridges of the British era were still good and while the recently constructed bridges were not lasting even for two decades. They said that Bhootnath bridge at Sarwari area of Kullu town developed cracks within five years of its construction and has been lying closed since January 2019. They demanded that the constructing companies should be made accountable for the stability of the bridges.