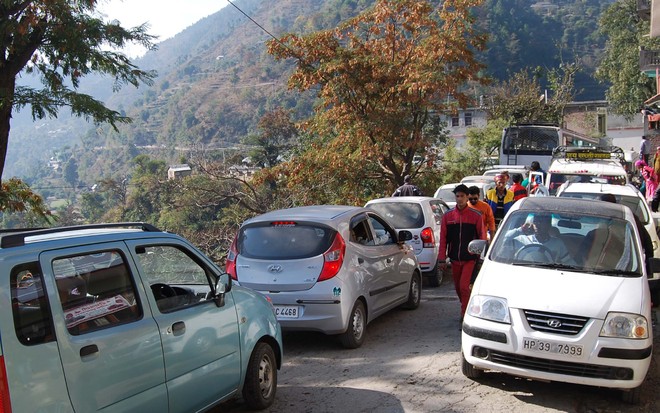 Vehicles stuck in a jam following a massive landslide on the Chandigarh-Manali national highway near Mandi. File

Traffic movement on the Chandigarh-Manali highway was restored on Tuesday, after being closed because of a massive landslide at Banala on Monday.

The road was cleared for traffic around 8 am.

Commuters had remained stranded near Banala on Monday. A landslide occurred near Shanidev Temple, blocking the road. The road was cleared but later another massive landslide took place. This caused a huge traffic jam near Banala. Due to continuous landslides, traffic movement could not be restored. Manu Sharma, a resident of Manali, who was on his way from Chandigarh, was stuck around 3 pm on Monday. He was waiting for the clearance of the road but, in the evening, he was forced to take shelter in a nearby village.

Like Manu Sharma, hundreds of locals and tourists had been stuck in the area for hours. The situation had become worse for the commuters because the alternative route via Katola between Mandi and Kullu was also blocked because of heavy snowfall.