Training on rescue during avalanche 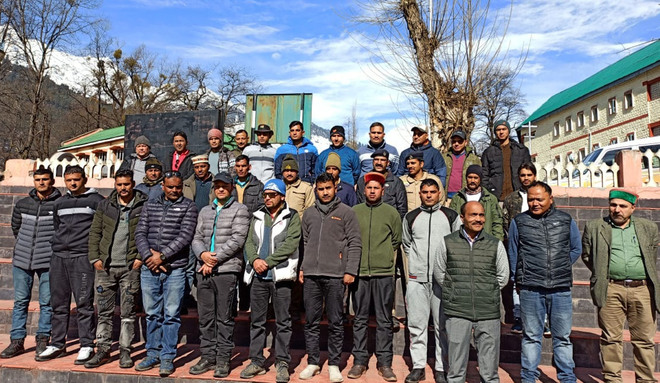 Volunteers during the training programme in Mandi. Tribune photo

The Himachal Pradesh State Disaster Management Authority (HPSDMA) in collaboration with Snow Avalanche Study Establishment (SASE) is imparting training on safety and rescue methods during snow avalanche.  Around 30 volunteers of Chamba, Mandi and Kullu districts are learning techniques of quick response in such an emergency to rescue victims. These three districts are prone to snow avalanches, and several people have lost their lives due to the disaster.

The three-day workshop in Manali started on February 12. Scientists of SASE, who are expert in snow avalanche study,

are imparting training to the volunteers.

RK Verma, a scientist of SASE, said, “Our motive is to provide maximum information to these volunteers on snow avalanche disaster, rescue and safety measures, which we have studied and collected in the last 50 years. We hope that it will play a significant role in saving people in case of emergency.”

Verma said a majority of the people were not aware of the difference between snow avalanche and glacier. They do not know which areas were prone to avalanche and how to lead a rescue operation, he said.

“We hope that this training camp will help the volunteers understand these things so that they can help other people in the time of need. Such training camps should be organised at regular intervals to enhance the capability of quick response of disaster management teams at the grass-roots level to save precious lives,” he said.