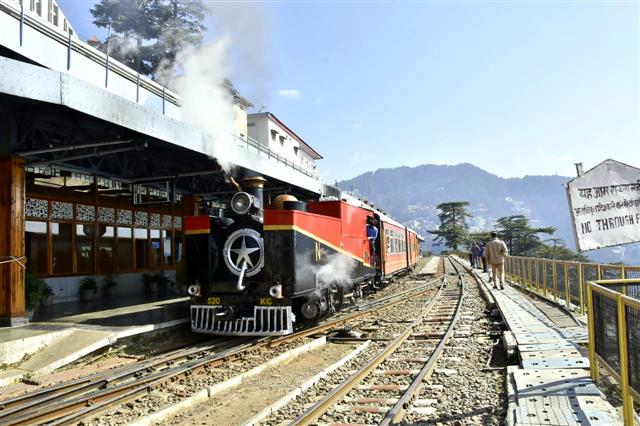 Built in 1903, this toy train ride is one of India’s most incredible feats of engineering covering a staggering 102 tunnels, 864 bridges and 919 stunning curves. Tribune Photo: Amit Kanwar

The trial run of the 114-year-old heritage KC 520 steam locomotive engine was held on the Shimla-Kalka UNESCO World Heritage railway track on the 44 km stretch from Shimla to Kaithlighat on Monday.

“It was a routine trial for an internal check as the engine had been sitting for the past ten months. The engine, along with two coaches, started its journey from Shimla at around 11:15 am,” said station superintendent Prince Sethi, adding that the heritage engine KC520, built by the North British Locomotive Company for Rs 30,000, was commissioned in 1906 and was used to drive trains till 1970 before it was replaced by diesel engines.

The steam engine was taken out of service in 1971 and repaired and rehabilitated in 2001.

Since then, the engine has been used for joyrides and comes on the track on a few occasions on tourist demand. The engine weighs 41 tonnes and can pull double its weight.

Meanwhile, the occupancy of the special train with seven coaches (182 seats), including two first-class coaches and three chair car and two general coaches, was restored in view of the ongoing tourist and festival season. On October 21, the government increased the seating capacity from 30 per cent to 50 per cent, and is likely to increase it further during Diwali.

On October 21, there were only three passengers but on Sunday, the number rose to 147 (81 passengers came from Kalka while 56 boarded the train from Shimla), sources said.

The hoteliers are upbeat as the 96-km long Kalka-Shimla narrow gauge Toy Train is a UNESCO World Heritage site that connects the Indian plains to the ‘Queen of Hills’ Shimla.

The special train would run till November 30.

Built in 1903, this toy train ride is one of India’s most incredible feats of engineering covering a staggering 102 tunnels, 864 bridges and 919 stunning curves. Spanning some 60 miles, the Kalka-Shimla Toy Train is said to be one of the most scenic railway journeys in India.