As Naddi wore a white mantle, locals from Dharamsala and tourists made a beeline for the town to enjoy the first snowfall of the season 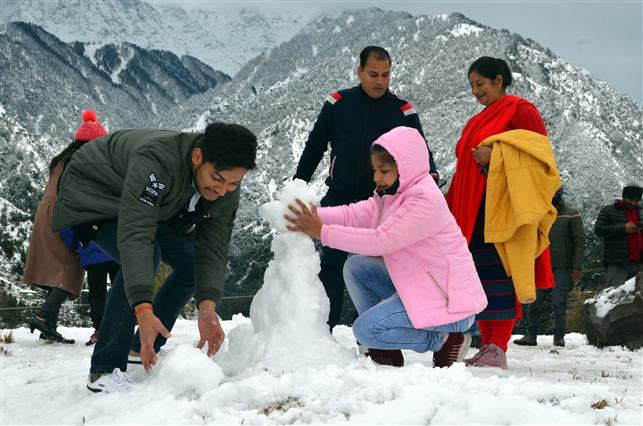 Upper Dharamsala areas, such as Naddi and Dharamkot, received snowfall in the early morning hours today. As Naddi wore a white mantle, locals from Dharamsala and tourists made a beeline for the town to enjoy the first snowfall of the season.

Revellers were seen playing with snow. Besides Naddi, most of the mountain tops overlooking Kangra valley also wore a white blanket. The first snowfall of the year in upper areas brought down temperatures too. Generally, snowfall in the region used to draw tourists from the adjoining areas of Punjab and Jammu and Kashmir to Dharamsala. However, due to rising Covid cases, very few tourists came to the region to enjoy snow.

As the upper areas of Dharamsala received snow, the lower areas have been receiving consistent heavy rainfall for the past about three days. The rains are being considered good for the wheat crop especially as about 80 per cent farming in the region is rainfed.