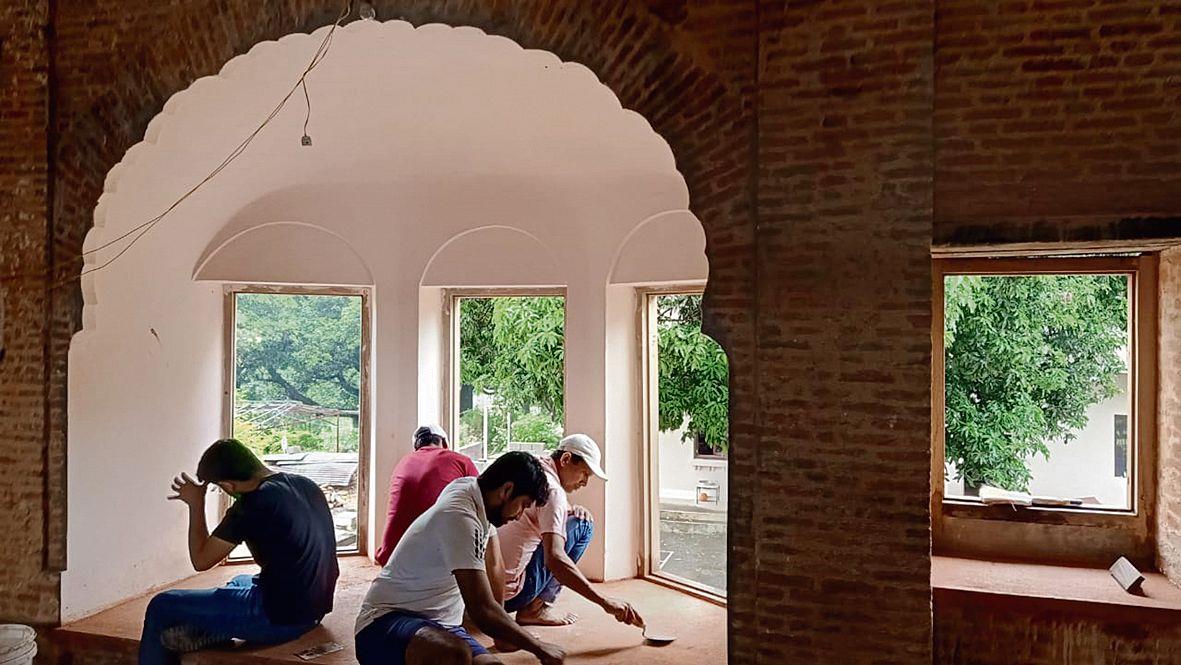 Experts from Rajasthan are busy these days trying to preserve the Nandpur fort located on the banks of the Pong lake in Kangra district. The fort that was part of the heritage of the Guler state of Kangra is being restored using the old Indian art of construction method of lime and baked earth.

Raghav Guleria, who now owns the fort, says, “The old building of the fort was constructed using lime and baked earth. The walls of the fort have withstood the test of time and are over a century old now. However, natural elements are now taking toll on the building. I want to restore it to its old glory”. He adds that he met a group of artisans from Rajasthan who were trying to revive the old art of construction using ‘chuna’ (lime) and ‘surkhi’ (baked) earth.

These artisans organised a workshop in the fort and restored the old walls of the Nandpur fort. They are also training local masons. Kangra district has a large number of old buildings, forts and temples. These buildings can be restored to their ancient glory using this art of construction, he says.

Kimberley Moyle, a consultant at Indi Architecture, is also here to learn the technique. She says, “I am inspired by India, where I see many traditional old houses built in lime and ‘surkhi’. It is sad to see that this precious knowledge is getting lost as people are now opting for RCC (reinforced concrete) structures that has much shorter life”.

Rafiq Muwal, a master artisan from Churu in Rajasthan, is teaching local artisans this technique. He says, “We make mortars by mixing lime, baked earth, jaggery and fenugreek water solutions. The mortars are applied on the walls with gentle stokes called ‘Thappi’. Then plaster is applied over the walls using the same material to give it a smooth finish. The buildings built using this technique can last for centuries. We can also restore old buildings using this technique”.

Guleria says, “The state government has been talking about preserving the heritage of Himachal. If the government wants to move in this direction and adopts this old technique, the preservation and renovation of old forts and temples can be the first step in this direction”.