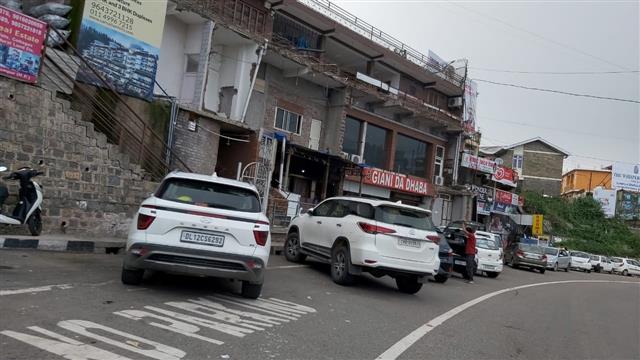 Tourist vehicles parked at a no parking spot outside an eatery at Dharampur.

Vehicles parked in front of eateries on the Kalka-Shimla national highway are a nuisance for commuters, especially during weekends when traffic volume increases.

Several popular eateries at Koti and Sanwara on the Parwanoo-Dharampur section and a number of restaurants at Sukhi Jori in Dharampur have become a major traffic bottleneck, at least during rush hours.

The haphazardly parked vehicles obstruct traffic on the road. It’’s a four-laned highway. Even then commuters face parking hassles at these spots. With no check on such roadside parking, the situation is worsening with each passing day.

Since the highway leads to Shimla and Kinnaur districts, a large number of tourists use this road. It is also used by truckers transporting apple from various districts.

The government is creating wayside amenities like toilets and eateries to facilitate tourists. Nothing, however, has been done to encourage eatery owners to create parking lots for customers.

This has defeated the purpose of four-laning the highway as vehicles can be seen parked haphazardly along the road at Rabon, Dharampur, Koti, Sanwara, Jabli, etc.

“The vehicles parked outside eateries on the Parwanoo-Solan highway obstruct traffic,” said Ravi, a Solan resident.

The high court has directed the state government to check parking along the roads in a bid to ensure the smooth flow of traffic. The authorities, however, feel handicapped in curbing the menace as there are no parking lots along the highway.