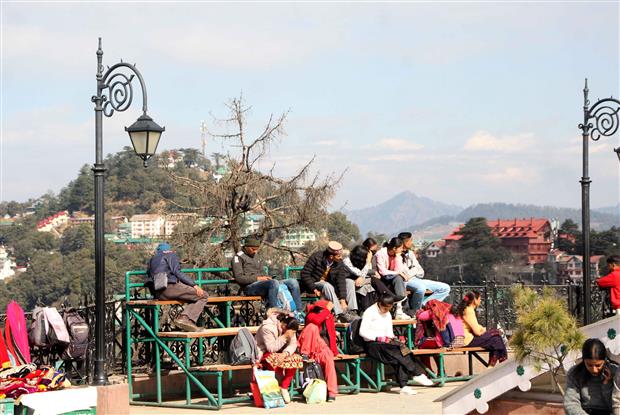 Locals enjoy a bright sunny day at The Ridge in Shimla on Monday. Photo: Lalit Kumar

The Meteorological Department has sounded an alert for widespread light to moderate snowfall at most places in the state over the next two days.

While snowfall will be light to moderate at most places, there can be heavy precipitation at isolated places in higher reaches of Chamba, Kangra, Kullu, Mandi, Shimla, Kinnaur and Lahaul-Spiti. — Surender Paul, Director, MET Centre, Shimla

It’s been a very dry winter so far and it will have an adverse impact on apple production. We hope there’s good snowfall over the next few days. — Sanjeev Thakur, Apple Grower from Rohru

“From tomorrow onwards, there will be widespread snowfall in the state. While it will be light to moderate at most places, there can be heavy precipitation at isolated places in higher reaches of Chamba, Kangra, Kullu, Mandi, Shimla, Kinnaur and Lahaul-Spiti,” said Surender Paul, Director, Meteorological Centre, Shimla.

“We are also expecting a good rainfall in lower hills and plains. Shimla is likely to receive some snowfall over the next two days,” said Paul. The department is expecting impact on essential services such as roads, electricity, water and communication over the next few days.

The department has issued an alert as regards low visibility and landslides in hilly areas. The police have also issued an advisory for the public and tourists to avoid venturing out into higher reaches.

The state has also been witnessing deficit rainfall since November. “We are hoping that this spell of snow and rainfall will reduce the deficit to a considerable extent,” said Paul.

The Director further said that another Western Disturbance was likely to hit the state towards the end of this month. “This will further reduce the rain deficit,” he added.