Will win Himachal and put it in your lap: Pratibha Singh to Rahul : The Tribune India

Will win Himachal and put it in your lap: Pratibha Singh to Rahul 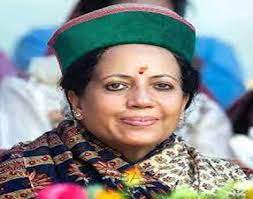 Himachal Congress President Pratibha Singh on Sunday pledged to win the upcoming state assembly elections and declared that the change in the party's national fortunes would start from Himachal.

Addressing the Mehngai Pe Halla Bol rally ahead of Rahul Gandhi in the National Capital's historic Ramlila Grounds, Pratibha Singh, in the presence of Rahul, said, "We will win Himachal Pradesh and place the state in the lap of Rahul Gandhi. Change in the party's fortunes will start from Himachal. We will ensure change starts from Himachal and then sweeps the country."

Referring to Rahul's upcoming Bharat Jodo yatra, Pratibha Singh said the party in Himachal would fully back the mobilisation effort on the ground and articulate the concerns of the people who are reeling under the "twin assaults of price rise and joblessness."

'We will support you in our respective states. We will raise the voices of the people on the streets and in Parliament. We tried to raise the price rise issue in Parliament but we were not given time," said the Himachal unit chief of Congress.

Singh spoke of the highly priced cooking gas cylinders and said, "Across the board GST had broken the backs of people and the PM does not want to listen to anything."

The Congress is into a do or die battle in the hill state which the BJP had won in 2017 bagging 44 seats in a 68 member house.

After the BJP won neighbouring Uttarakhand, the Congress is facing an uphill task of preventing a saffron rerun in the state.