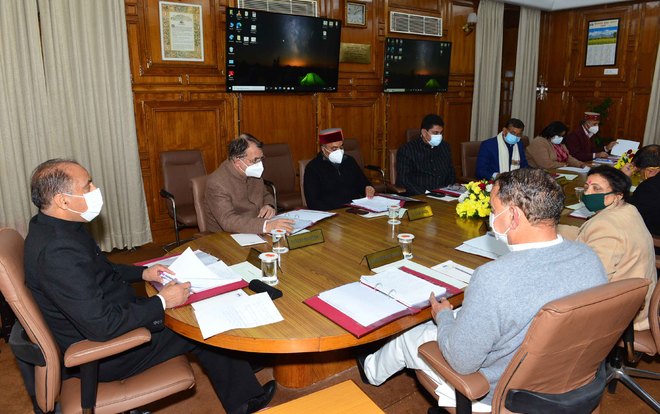 In the backdrop of a grim Covid scenario, the winter session of the Vidhan Sabha — which was scheduled to be held at Dharamsala from December 7 to 11 — has been called off, leaving the opposition Congress fuming.

The Cabinet, at its meeting held here today, decided to call off the five-day winter session and urge the Governor to issue a fresh order, cancelling the session, which had already been notified. “Since, there has been a spike in Covid cases, necessitating stricter curbs, the Cabinet has decided to call off the winter session of the Vidhan Sabha,” confirmed Suresh Bhardwaj, Urban Development Minister.

Four districts of Himachal are among the top 10 in the country in terms of the highest positivity rate, forcing the imposition of night curfew in Shimla, Kullu, Mandi and Kangra. Himachal has been ranked at the 19th position among 20 states in Covid management.

No new dates or venue for holding the session has been decided by the Cabinet. The decision has majorly upset the Congress. “This is a government that likes to take U-turns by changing its decisions daily. Having failed to tackle the Covid pandemic, it is scared to face the opposition,” said Mukesh Agnihotri, Leader of Opposition.

The Congress and the CPM had demanded that the session be held but the venue be changed to Shimla instead of Dharamshala, as is the tradition.

“The CM should not bother with about what the Congress is saying. He should explain the miserable failure of his government in making Himachal the worst-managed state vis-a-vis Covid, with four districts having the highest positivity rate in the country,” said Agnihotri.

He rubbished the charge that the Congress was a divided house. “The Opposition wants serious discussion on Covid and it is the CM who is calling up MLAs to ask them to demand cancellation of the session,” he alleged. He alleged that the government had confused people with new notifications daily, which are withdrawn within the next two or three days.

The government has already pointed out that there was no urgency in holding the session as the six months’ mandatory period was to get over on March 18, 2021, the winter session could be postponed. The monsoon session of the Vidhan Sabha got over on September 18.

The Cabinet, after deliberating on the Covid situation, felt that the time was not appropriate for holding the session, said sources. They said since the state government had imposed a cap of 50 persons at social gatherings, the Cabinet felt that it would not be correct to convene the session as the number would exceed the prescribed norms, inviting public criticism.