The post office at Hikkam is located in Himachal Pradesh's Spiti Valley at the height of 15,000 feet above sea level 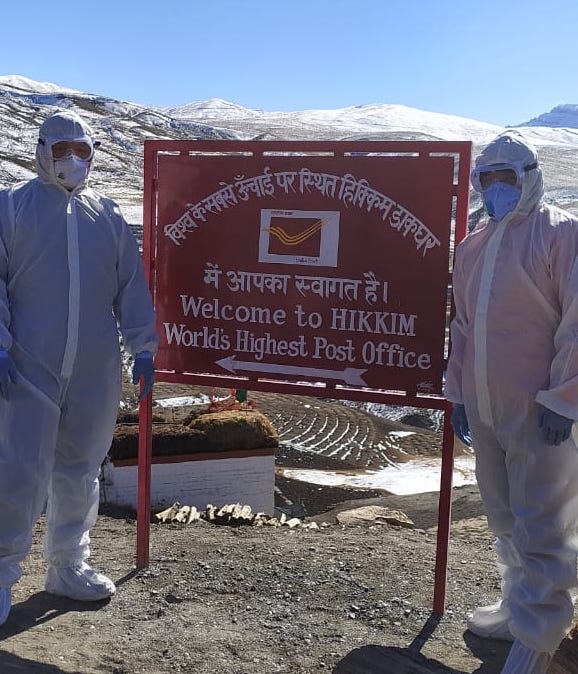 Hikkam has a population of 200. Tribune photo

World's highest post office at Hikkam located in Himachal Pradesh's Spiti Valley at the height of 15,000 feet above sea level and currently marooned in a thick blanket of snow has been hit by the coronavirus, officials said on Tuesday.

A team of doctors for the first time reached the village where the night temperature currently hovers around 20 degrees Celsius below freezing and collected samples on Monday.

Hikkam has a population of 200.

Also, its nearby villages Komik and Langche have been hit by the pandemic. They support a population of 87 and 136, respectively.

"A total of 80 swab samples were collected in three villages and out of the four tested positive," a health official told IANS over the phone from Kaza, the headquarters of Spiti and some 320 km from the state capital Shimla.

Kaza was the first in the state to sanitise the entire block to prevent the spread of the pandemic.

The picturesque Spiti Valley, a cold desert dotted by tiny helmets spread over the Himalayan peaks, adjoining Tibet, takes you to a land of Buddhism and virgin nature.

As per the state health bulletin, a total of 4,646 coronavirus samples were taken in the valley till date and out of them, 473 tested positive. The active cases are 25. Two deaths have been reported.

Authorities blame the locals, who are largely the Buddhist farmers growing barley, potatoes, wheat and black peas, for the virus spread as they are reluctant to go to hospitals owing to a belief they will get treated automatically with the blessing of a local deity.

"Special teams of the health and the police have been visiting village to village to educate the locals about how to contain the virus and also collecting the samples," Additional District Magistrate of Kaza, Gyan Sagar Negi, told IANS.

The freezing temperatures and continuous snowfall have been forcing the locals to stay indoors most of the time, he added.