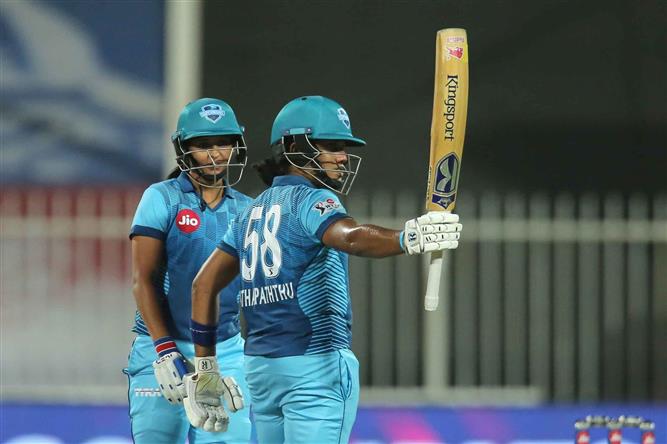 Chamari Atapattu of Supernovas raises his bat after scoring a fifty during their Women’s T20 Challenge match against Trailblazers at the Sharjah Cricket Stadium in Sharjah on Saturday. IPL

Sri Lanka's Chamari Atapattu continued her purple patch, smashing a quick-fire half-century as two-time champions Supernovas posted 146 for six against Trailblazers in a must-win game of the Women's T20 Challenge here on Saturday.

Electing to bat, Supernovas rode on Atapattu's aggressive 47-ball 67, which was studded with five fours and four sixes, and skipper Harmanpreet Kaur's big shots (31 off 29) in the slog overs to post a challenging total.

Supernovas were going strong at 80 for no loss in 10 overs but the Trailblazers spinners Harleen Deol (1/34) and Salma Khatun (1/25) pulled things back, giving away just 23 runs in next five overs.

However, Harmanpreet exploded in the 19th over, smashing a four and a six to pile up 15 runs to take them close to 150-mark.

For Trailblazers, experienced Jhulan Goswami was the best bowler with figures of 1 for 17 from 4 overs, while Harleen and Khatun picked up a wicket each. There were also three run-outs in Supernovas' innings.

Earlier, left-handed opener Atapattu looked for runs from the word go and made her intentions clear with two boundaries in the second over of the innings bowled by Deepti Sharma.

Later in the fourth over, the Sri Lankan nonchalantly hoisted one over mid-off for a six and then swept Deepti for a boundary as Supernovas amassed 15 runs.

Atapattu's opening partner Priya Punia, who got off the mark in her ninth ball, played second fiddle as the duo scored fifty in the powerplay.

Priya, on 17, got a reprieve when Dottin dropped a catch off Rajeshwari Gaikwad's bowling.

The two kept scoring at a brisk rate with Atapattu not afraid to go for lofted shots, while Priya too rotated the strike and also picked up three boundaries.

Priya fell when her attempt to clear the fence saw Deepti pull off a superb catch running forward off Khatun. She added 89 runs for the first wicket with Atapattu.

Atapattu reached her fifty from 37 deliveries with a powerful sweep off Harleen.

The Sri Lankan was holed out by Hemalatha off Harleen's tossed up delivery in the 17th over.