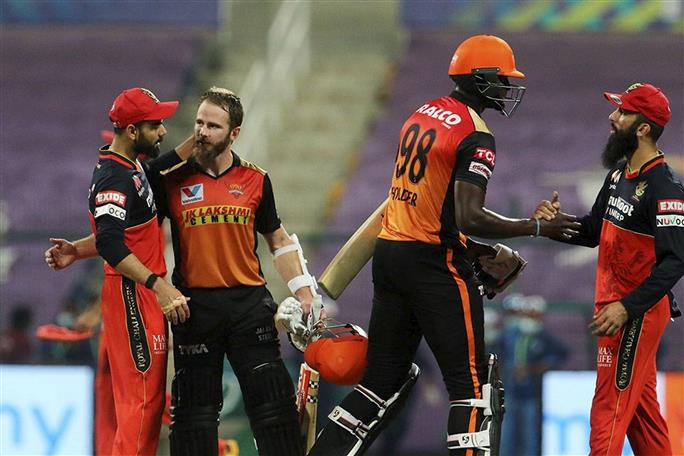 A bit of nerves, some hesitation and almost every good stroke going straight to the fielder — Royal Challengers Bangalore skipper Virat Kohli listed multiple reasons for a “strange phase” in the IPL for his side which ended with a loss in the Eliminator.

RCB lost by six wickets to a resolute Sunrisers Hyderabad after posting a modest 132 on the board despite a batting-heavy line-up in the Eliminator on Friday.

“Maybe a bit of nerves, maybe a bit of hesitation, we need to be more expressive with the bat. We didn’t put enough pressure on their bowlers. We didn’t have any phases in the game where we got away from the opposition,” Kohli rued.

Kohli admitted that it has been “a strange kind of phase in the last four to five games” of the league stage. His side got through to the playoffs despite losing four matches on the trot.

On Friday, Kane Williamson struck a half-century to ruin RCB’s chances after he was dropped by Devdutt Padikkal at the boundary in a difficult attempt when SRH needed 28 from 2.4 overs.

SRH will now play Delhi Capitals in the Qualifier 2 on Sunday for a place in the final while the RCB were knocked out.

“It is a game of margins and if Kane (Williamson) was taken there then it is a different ball game,” Kohli said at the post-match presentation.

Kohli said his side just allowed SRH bowlers to bowl to the areas they wanted.

“Altogether they put us under a lot of pressure in the first innings. Few soft dismissals, few fortunate ones for them as well and we just didn’t have enough runs on the board.

Talking about the positives from the tournament, he said, “Couple of people have stood up, Devdutt (Padikkal) is one of them, he stepped up nicely and getting 400+ runs is not easy. He has played with a lot of class and efficiency for the team. Very happy for him.”

Kohli said not having home and away matches had made this IPL one of the most competitive ever.

“That also tells you the strength of the teams in the IPL, no team is run away favourites as such and every team has strong players. One of the other reasons is playing in only three venues and there’s no home and away advantage. Similar conditions for everyone and that’s the reason this has been one of the competitive IPL this year,” he said.

He later tweeted to say the dressing room is in good spirits and he is proud of the effort.

“Together through the highs and lows. It’s been a great journey for us as a unit. Yes, things did not go our way but proud of the whole group,” he said in a post which also a picture of the entire RCB squad.

Sunrisers captain David Warner talked about nerves as well but lauded the resolve shown by his side.

“My nails are okay for the moment. They (Natarajan and Rashid) have been of great impact for us. We like to bowl Sandy (Sandeep Sharma) and (Jason) Holder five overs at the top. Then we try to bowl Rashid and Natarajan in the middle overs.

“Rashid has a lot of pressure on him to perform. Congratulations to Natarajan. Kane is our banker. He manages to stick in there and plays the pressure innings. I am running out of superlatives for these two blokes (Rashid and Kane),” he said.

Noting that RCB have world-class batsmen in their line-up, Warner said, “You knew that wicket had something in it. The boys bowled fantastically well in the middle overs.

“It is too early to say. We obviously have Delhi to play. We have been talking about their world class bowling side. But I am excited,” he concluded. PTI

The saffron party has so far clinched Khowai Municipal Counc...