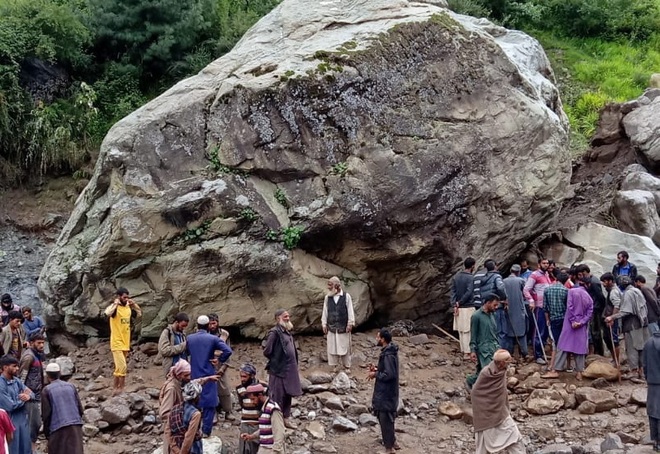 Locals gather near the landslide site at Shodol in Reasi on Tuesday. PTI

Three members of a nomad family, including a couple, were buried alive along with their cattle under a mudslide in the remote Shadol area in the upper reaches of Gulabgarh in Reasi district during the intervening night of Monday and Tuesday.

Rashmi Wazir, Senior Superintendent of Police (SSP), Reasi, told The Tribune that three persons including a couple got buried after their ‘dera’ (temporary shelter) came under the mudslide in the upper reaches in the Shadol area.

“On receiving information, we rushed police teams from the Khor and Deval to the area. After hectic efforts, we have retrieved all three bodies from the area,” the SSP said.

The deceased were identified as Khalil Ahmad (30), his wife Ruksana Begum (25) and Mohammad Aslam, all the residents of Mahore.

Some buffaloes and other animals also got perished in the mudslide, the police said.

In summers, nomads move to upper reaches of the region to graze their cattle and return to plains with the onset of winters.

Meanwhile, the Jammu-Srinagar national highway was closed for traffic early on Tuesday morning after heavy rains triggered a massive landslide in the Dalwas area in Ramban district, snapping road connectivity to the Kashmir valley with the rest of the country.

“Nearly 60-metre road stretch at Dalwas has been washed away after the landslides, closing the highway for traffic. Our men and machinery are on job and restoration work will take time. The traffic is most likely to be restored tomorrow,” said Ajay Anand, DSP, Traffic (National Highway). — TNS