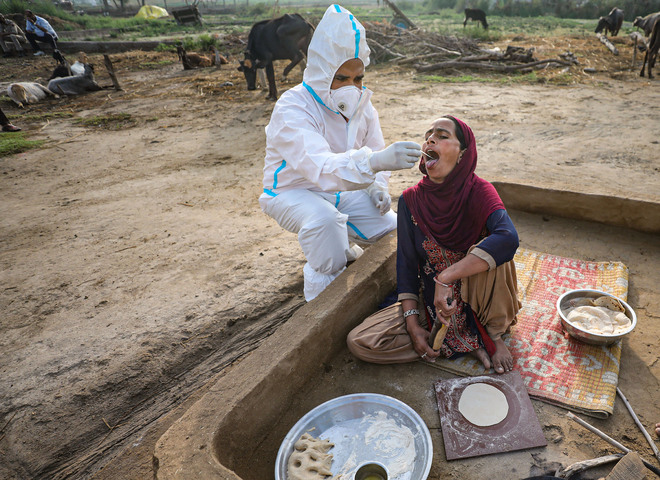 A health worker collects samples of a woman from the Gujjar-Bakarwal community in Jammu. PTI

A total of 599 cases and 13 deaths were reported from Jammu division and 1,124 cases and 21 deaths from Kashmir division while 2,731 patients were discharged from hospitals after recovery.

Ladakh has recorded two more Covid-related fatalities and 113 fresh cases, taking the infection tally to 18,854 and the death toll to 193

The active cases in the UT have come down to 1,505. As many as 3,199 samples were tested negative on Thursday

In Ladakh, 113 fresh cases and two deaths surfaced. The UT’s infection tally stands at 18,854 and the death toll at 193, officials said. Both deaths have been reported from Leh. Leh has so far registered 139 fatalities and Kargil 54, officials said, quoting a bulletin released by the Directorate of Health Services.

A total of 137 more patients, including 119 from Leh and 18 from Kargil, have recuperated from the disease, taking the total number of recoveries to 17,257. — IANS/PTI