155 ultras killed since abrogation; no let-up in militant recruitment 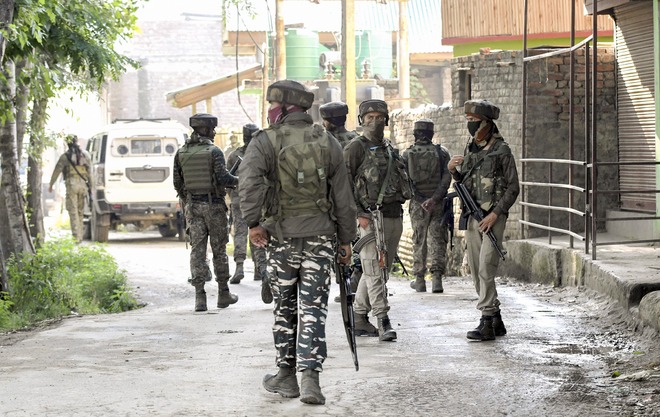 A year after the abrogation of Article 370, security forces have intensified hot pursuit of militants in Kashmir. From eliminating militant leadership to neutralising stone-throwing, the strategy has apparently yielded results for the forces in the war against militancy.

Last year after the big decision of August 5, the security grid in the initial months was focused on containing law and order situations. In over four months later 18 militants were killed. The decision of abrogation of J&K special status was imposed by the Centre under a strict lockdown and a total communication blackout.

With the beginning of this year, forces stepped up operations in militant hotbeds, especially south Kashmir. This year they have killed 137 militants, including operational chiefs of four known groups.

“The security situation in the last one year has been good. The forces have been in control and are on top,” J&K’s Special Director-General, CRPF, Zulfiqar Hassan said.

The four districts of south Kashmir, Anantnag, Kulgam, Pulwama and Shopian, which have been the epicentre of violence after the killing of militant commander Burhan Wani in 2016, witnessed a massive crackdown against militants. Over 80 per cent of militants killed this year were from south Kashmir. 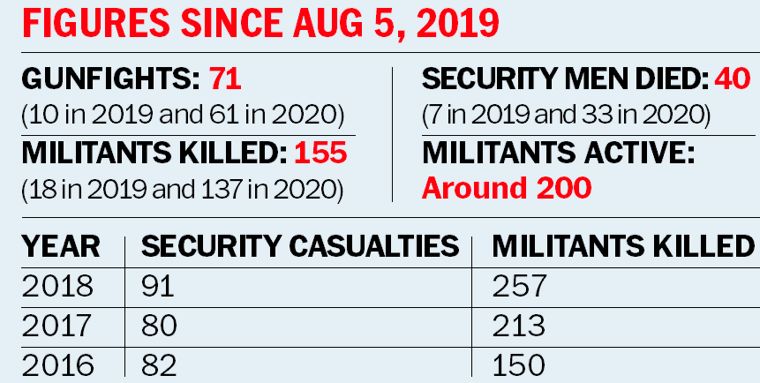 “The situation in south Kashmir has improved a lot and the violence has been low in the last one year,” the General Officer Commanding of Victor Force, Maj Gen A Sengupta said. “On an average, we have been carrying around 14,000 to 15,000 operations in a month. Because of this intensity, we have been able to reduce the space for terrorists in south Kashmir,” he said.

The Army officer said all the indicators of the violence were constantly showing a decline.

Despite the offensive, militants have been able to carry out high-profile attacks this year that led to killing of a Colonel, Major, police officer and five elite Para commandoes. There is also no let-up in youth joining militant ranks. This year around 70 new entrants have joined militancy and the brewing anger on the streets post abrogation may be one of the reasons to have spurred youth to join militancy, even though there is a “shortage of arms”.

The major worry for the security apparatus is that while they have been able to reduce the violence level, they fear Pakistan was doing every effort to destabilise the situation in Kashmir.