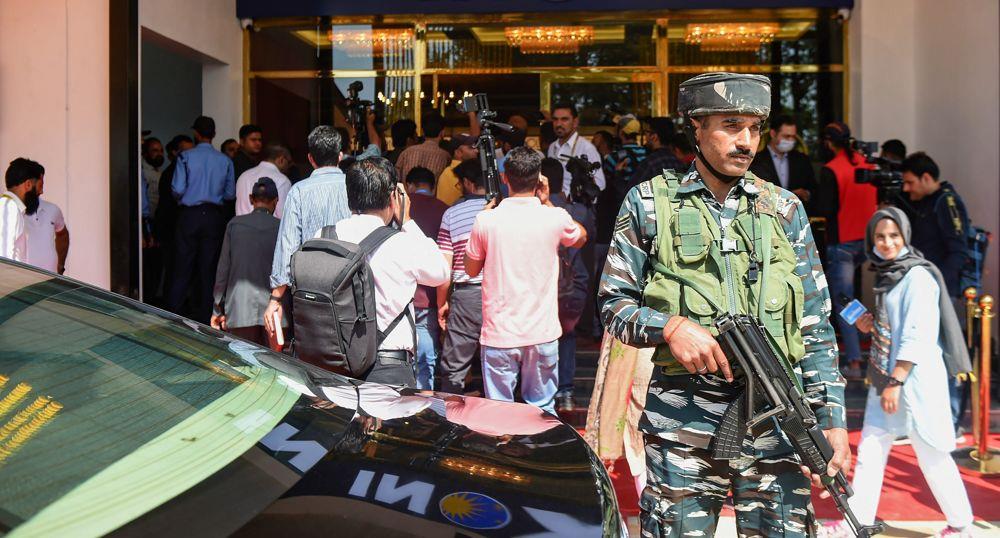 A security man keeps vigil outside a multiplex during its inauguration ceremony in Srinagar on Tuesday. PTI

“A new film policy has been framed and a film city will come up here in the next two months. Incentives will be provided to locals under the policy to make films,” he said.

Sinha said Kashmiri people remained entertainment-starved for the past three decades. The Aamir Khan-starrer Lal Singh Chaddha was run during the inauguration ceremony of the 520-seater multiplex with three auditoriums. Selected mediapersons and officials were invited for the trial run.

Designed by the INOX, one of the top film distributors and exhibitors in the country, the multiplex has many food courts and recreation facilities for children.

Srinagar was once a hub of entertainment as the district had eight big cinemas—Palladium, Regal, Sheeraz, Neelam, Khayam, Broadway, Naaz and Firdous. “We are trying to bring back the lost era again,” the L-G said. Soon people will be able to watch 3D movies as well on the screen, said Vikas Dhar, owner of the multiplex. The multiplex is the collaborative project of the INOX and Dhar family.

The cinemas across Kashmir were shut after an armed insurgency erupted in 1989. In 1999 when militancy was waning, the National Conference government opened theatres—Broadway, Neelam and Regal—in Srinagar. On September 24, 1999, militants lobbed three grenades at Regal Cinema, located in the high-security Lal Chowk area, right after its inaugural late evening show, killing a person and injuring 12 others.

‘Won’t buy peace, will establish it’