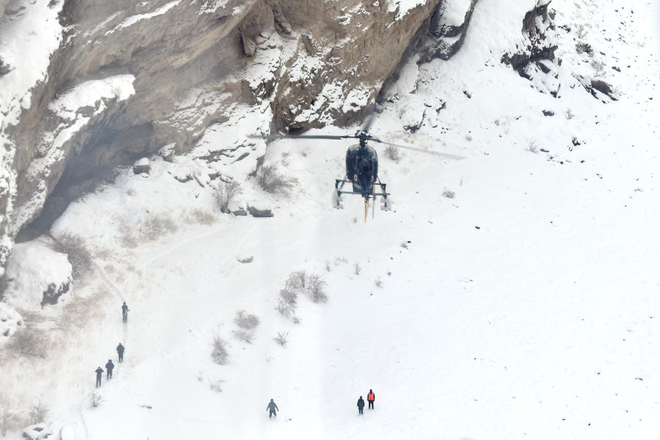 Rescue operation by the Indian Air Force and Army helicopters on the frozen Zanskar River in Ladakh. Tribune photo

The Indian Air Force (IAF) and Army helicopters have rescued 27 Chader Trackers, including two locals, who were stuck while on a trekking expedition on the frozen Zanskar river in the Union Territory of Ladakh.

The 27 stranded trekkers were among over 100 trekkers who were camping in remote villages in Nyraks on the Chader trek route after they got stuck at various camps following the overflow of water on snow.

Chaddar Trek is a winter trek in Ladakh, popular amongst adventurists on the frozen Zanskar river, a tributary of Indus River in Ladakh. The trek is undertaken for a period of four to five days with halts at various places.

An official at the Deputy Commissioner’s office in Leh, entrusted to monitor the rescue operation, said “Three sorties of helicopters were operated on Tuesday that rescued 27 stranded trekkers, including two locals. The Army operated one sortie, while the IAF operated two sorties.”

In the firstst sortie, an Army helicopter brought six passengers from Nyerak. Out of these, four trekkers had been admitted in Army General Hospital in Leh. All of them are out of danger.

“The IAF also airlifted eight trekkers and two of them have been admitted in SNM district hospital in Leh, while one trekker is in Army General Hospital with frostbite syndrome. Seven trekkers along with one student have been airlifted in the third sortie,” an officer said.

He further said the rescue operation will resume tomorrow if the weather remained favourable to airlift the remaining stranded Chader trekkers.

Over 50 trekkers and 40 porters, including guides had gone missing on the Chader trek between Tibb and Nyeraks camps on Saturday. The trekkers could not reach base camps during the trek as their movement stopped due to the melting of snow over the frozen Zanskar river in Ladakh which is popular amongst trekkers.

Responding swiftly to the request received from the Civil Aviation of the Ladakh UT administration, Army columns were launched from two directions to reach the tourists at Nyrak village along the Zanskar river. — OC