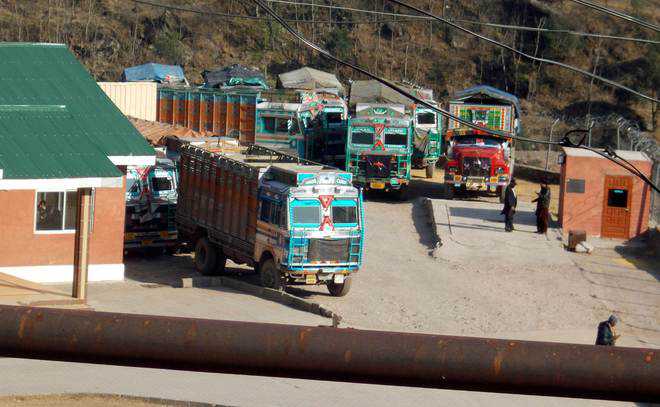 Facing losses and economic instability due to the ongoing pandemic, traders of Poonch in Jammu and Baramulla in Kashmir have appealed to the government to resume the cross-border trade between India and Pakistan. File photo

Facing losses and economic instability due to the ongoing pandemic, traders of Poonch in Jammu and Baramulla in Kashmir have appealed to the government to resume the cross-border trade between India and Pakistan that was suspended in April 2019.

Started in 2008 as a confidence-building measure, the trade from two routes — Poonch-Rawalakot and Uri-Muzaffarabad — had become a source of livelihood for villagers close to the LoC where they got direct or indirect employment.

On 19 April, 2019, the Union Ministry of Home suspended it citing misuse of the trade routes by Pakistan-based elements for funneling weapons, fake currency and narcotics.

Krishan Singh, general secretary of the Poonch-Rawalakot Trade Association, says, “Over 20,000 people had got employment directly and indirectly. Since the trade suspension, the youth who worked as labourers at Chakkan-da-Bagh (trading centre at Poonch) have migrated to other places in search of employment.”

Singh informs that the trade, which was carried out four days a week, had created a micro economy in the region and several people, including truck drivers, helpers, labourers, eatery owners among others, drew benefits.

The government had approved 21 items for export and import that majorly included dry fruits, fruit spices and embroidery items. The trade was based on barter system (exchanging goods for goods) and currency was not involved.

According to Krishan Singh, he had met officials of the National Investigation Agency (NIA) and the Home Ministry, seeking resumption of trade with all checks on “illegal activities”.

As per a study conducted by the Bureau of Research on Industry and Economic Fundamentals (BRIEF), between 2008 and 2019, trade worth Rs 7,500 crore was recorded at these two points. “This period generated over 1,70,000 job days and freight revenue of about Rs 66.4 crore for transporters in Jammu and Kashmir. As many as 1,11,113 truck-full of items were exchanged and Rs 90.2 crore paid to labourers,” the study states.

Abdul Razaq Khaki, president of the Poonch-Rawalakot Trade Association, says the trade also strengthened the relations between the two nations. “There are many separated families living on both sides of the LoC. The trade had become a binding force for them. Since the suspension of the trade, we feel separated,” Khaki said. The pandemic had also created financial trouble for local traders.

“National security is priority but trade can be resumed by keeping a strong vigil by security and intelligence agencies,” he added.

The cross-LoC trade gave employment to over 20,000 people. Now, youths have migrated to other places in search of jobs. Krishan Singh, general secretary, Poonch-Rawalakot trade association