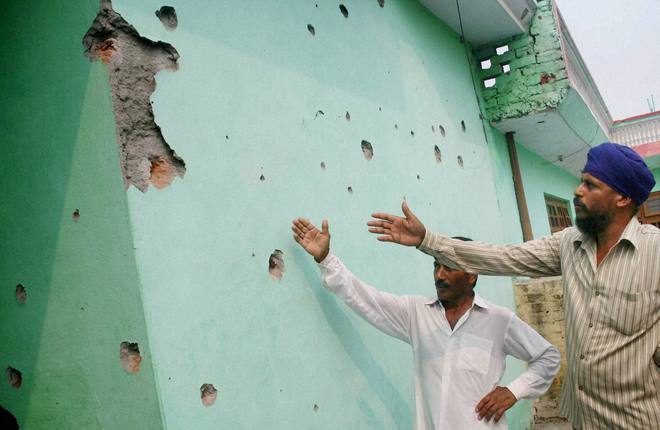 Villagers show bullet marks on the wall of a house after a firing from Pakistan side in Devigarh village at the India-Pakistan International border at Arnia sector in Jammu on Saturday. PTI

Sharing details of the security situation on the Line of Control (LoC) and the international border in Jammu and Kashmir, the government today informed the Lok Sabha that 31 civilians and 39 security personnel had been killed in cross-border firing and ceasefire violations since the abrogation of Article 370 on August 5, 2019.

Responding to a question in the lower house of Parliament, Union Minister of State (MoS) for Home G Kishan Reddy said incidents of ceasefire violations and cross-border firings by Pakistan along the Line of Control and the international border in J&K had been reported for decades. Security forces respond with immediate and effective retaliation, he said. “Thirty-one civilians were killed and 39 security force personnel were martyred in such incidents from August 5, 2019 to February 28, 2021,” the minister said.

According to the Union Minister of State, the Central Government had sanctioned construction of 14,460 bunkers (1,431 community bunkers and 13,029 individual ones) to provide protection to the people living in areas close to the border and to safeguard human lives in the event of cross-border firing.

Out of these, 7,856 bunkers have already been constructed in the border areas of the Union Territory, he added.