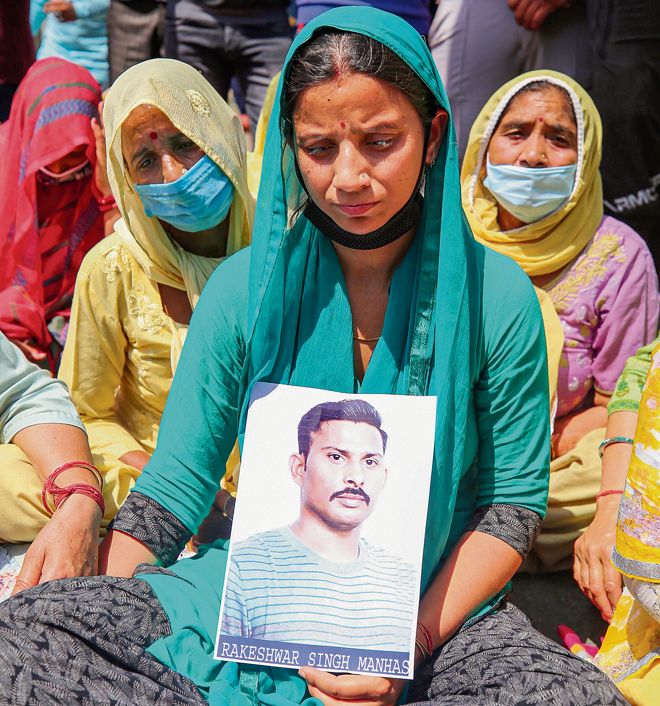 Relatives of a CoBRA commando held hostage by Naxals after a recent gunfight with security forces in Chhattisgarh’s Bijapur district blocked the Jammu-Poonch highway on Wednesday, demanding an assurance from the government for his safe release.

“He is the responsibility of the government, which should take immediate action to ensure his safe return to us. We want the government to inform us about the action it is taking for his release,” Meenu, wife of abducted jawan Rakeshwar Singh Minhas, said.

Thirty-one jawans were injured while CoBRA commando Minhas, belonging to its 210th battalion, went missing after the gunfight that took place along the Bijapur-Sukma border on Saturday and was stated to have been taken hostage. Twenty-two personnel from various security forces were killed in the ambush.

In Jammu, dozens of Minhas’s relatives and neighbours took to the streets and blocked the main road outside his Burnai residence on Wednesday, raising slogans of “Bring back our hero”, “Long live India” and “Shoot the traitors of the nation”. Officials said a police party was at the scene trying to persuade them to allow normal movement of traffic, which had to be diverted to another route. — PTI