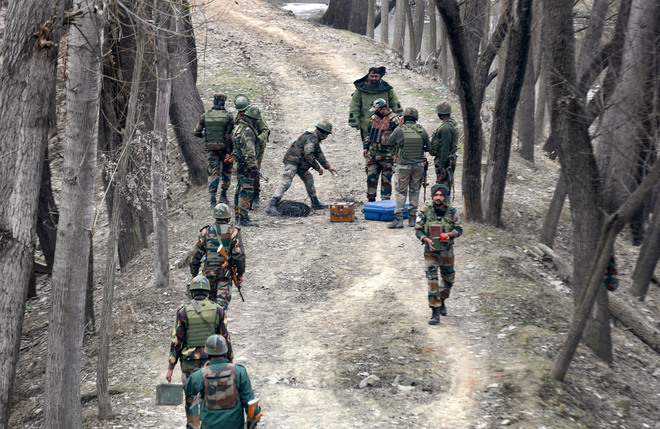 A bomb disposal squad defuses an IED, which was detected at a bridge near the Srinagar-Jammu highway near Pantha Chowk. PTI

Alarmed over the spotting of sticky bombs in Samba district last week, the security agencies have been working to come up with changes to the standard operating procedure (SOP) for convoy movement, as forces today destroyed a suspected Improvised Explosive Device (IED) found in Nowgam.

Officials in the J&K’s security establishment said as per the changed SOPs, there would be a restriction on civilian vehicles traveling alongside convoys.

Sticky bombs can be attached to vehicles and detonated remotely or exploded using timer. On February 14, the second anniversary of the Pulwama terror attack, the J&K Police recovered 7 kg of IED near the busy Jammu bus stand area, averting a major terror attack. The police also recovered 15 small IEDs and six pistols in Samba district.

A senior security official said, “The explosive device is fixed with a coin-shaped magnet on the bottom of a small container. This enables the attackers to stick the bomb to a metal surface with the target mostly being a moving vehicle. Instead of being detonated through remote control, these are switch bombs with a timer of 5-10 minutes which gives them enough time to flee the blast area.”

The official said the sticky bombs found in Samba were identical to the one used in the attack outside Israeli Embassy, where a car exploded when a magnetic bomb stuck to it went off in a high-security area in New Delhi, injuring an Israeli envoy’s wife.

The Al-Qaeda in Indian Subcontinent (AQIS) is believed to have the expertise in manufacturing such IEDs. “These are traditionally used in Afghanistan and Iraq. These are imported and not made in India,” the official added.

Meanwhile, the security forces destroyed a suspected object, believed to be an IED, found by a patrol party on the Srinagar-Baramulla highway near Nowgam area of the city, J&K police officials said.