Amid agitation for their relocation, 5 Kashmiri Pandit employees transferred from Kashmir to Jammu 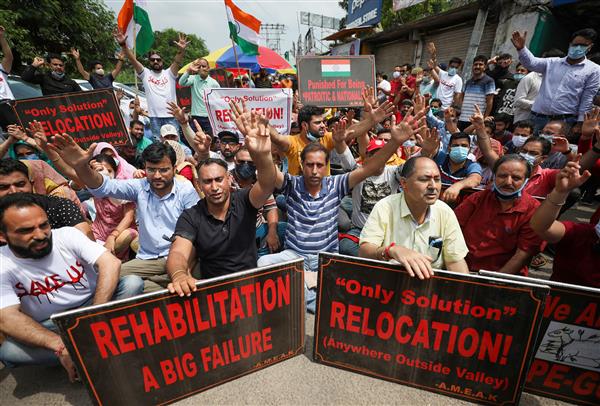 The Jammu and Kashmir administration has transferred five Kashmiri Pandit employees from Kashmir to Jammu, a step welcomed by the community members who have been on a strike for over two months in support of the demand for their relocation over safety concerns.

The Landscape division of the Public Works Department (Roads and Buildings) last week ordered the transfer of five in-charge assistant engineers, all Kashmiri migrant employees, from Kashmir Valley to Jammu.

It was not clear immediately whether these were stand-alone transfers or the administration was planning to relocate these employees.

In three separate orders issued by the executive engineer of the Landscape division Kashmir on July 19 and 22, the engineers -- Neetu Koul, Sunaina Raina, Sidharth Bhat, Sawan Koul and Sami Pandita -- were directed to report to the assistant executive engineer (R&B) landscape subdivision 3rd in Jammu.

Nearly 4,000 Kashmiri Pandits are working in different departments in the valley after their selection under the prime minister's employment package. They have been on an indefinite strike in support of their demand for their relocation outside the valley since the killing of their colleague Rahul Bhat.

Bhat was shot dead by terrorists inside his office in Budgam district of central Kashmir on May 12.

Hundreds of the employees have already returned to Jammu and are holding regular protests at the office of relief commissioner, while their colleagues in the valley are on protest at their camps, despite repeated attempts by the government to end the impasse by assuring their relocation at safer zones within the valley.

The protesters in the past had claimed that dozens of employees who are close relatives of BJP leaders were transferred to Jammu from the valley.

The All Migrant (Displaced) Employees Association Kashmir (AMEAK), which is one of the organisations spearheading the agitation, welcomed the transfer of the five engineers.

"The KP employees on agitation accepted this (transfer) as a welcome step and extended their gratitude towards UT administration for finding a suitable way...,” a spokesperson of the AMEAK said.

The organisation said their agitation will continue till the last employee gets relocated or attached/deployed to the relief commissioner's office in Jammu till security conditions become conducive for them in the valley.

"We accepted the jobs because of two fundamental reasons: One, due to adverse economic conditions of displaced community living in exile from last three decades and secondly, we wanted to contribute to the cause of nation building. Most of us joined after 2014 as we have tremendous belief in the able leadership of Prime Minister (Narendra Modi) but we feel as if we have been abandoned by our leadership,” the spokesperson said.

Reiterating their demand for relocation outside the valley, the AMEAK urged for revocation of the “unconstitutional bond” signed by employees at the time of their joining which among other things demand that the selectee agrees to serve in Kashmir and will not at no stage opt or seek transfer outside the valley.

The bond also warns of termination of the service if the employees migrate from Kashmir for any reason at any stage of their service or if the selectee wilfully neglects or refuses to perform his or her duty in Kashmir.