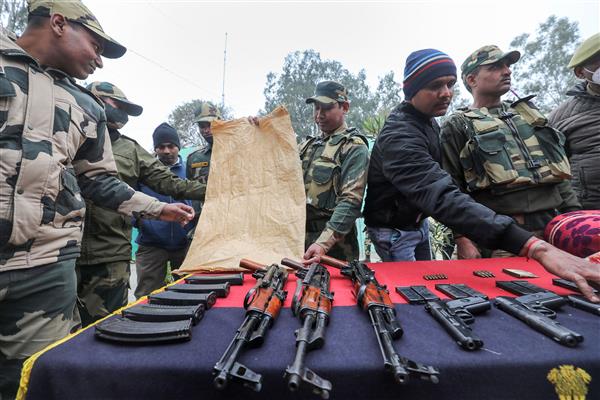 BSF personnel display the seized weapons along the border in Samba district on Monday. PTI

The BSF today said its troops had shot a Pakistani man when he tried to sneak into India near Bhule Chak Post in Arnia sector of Jammu. This is the second such incident in two days as Army personnel had on Saturday killed Mohd Shabbir Malik, a Pakistani terrorist, in Keran sector of Kupwara district.

In a separate operation, BSF men found a huge consignment of arms and heroin along the International Border in Samba district.

A BSF official said the troops guarding the borders noticed a man heading towards the fence from the other side of the border near Bhule Chak Post in Arnia. “Several warnings were given to him but he came close to the fence and tried to sneak into the Indian side,” a senior BSF official said, adding that the personnel shot him dead. “The body is still lying close to the International Border,” he said.

Last month, BSF men had shot down a woman intruder near Allah Mai Ke Kothe Border Outpost in RS Pora. According to officials, infiltration bids are made during this season amid dense fog in the plains of Jammu, but security men remain alert to thwart any such attempt.

Meanwhile, troopers found a consignment packed in a white-coloured sack hidden in ‘sarkanda’ (wild grass) near the Chamliyal border outpost. It was noticed during patrolling. The bag had the markings of Karachi Fertilizers Company Limited.

Officials said the seizure included three AK rifles along with five magazines, four pistols along with seven magazines, five packets of heroin besides some assorted ammunition. As the search operation continued, it was not yet established whether the consignment was dropped by a drone or was smuggled from across the border by arms and narcotics peddlers, officials added.

Meanwhile, BSF IG, Jammu Frontier, DK Boora said deployment of troops and surveillance systems had been strengthened amid intelligence inputs of heightened activity at terrorist launch pads on the other side ahead of Republic Day.