Amit Shah arrives in Jammu, security up : The Tribune India 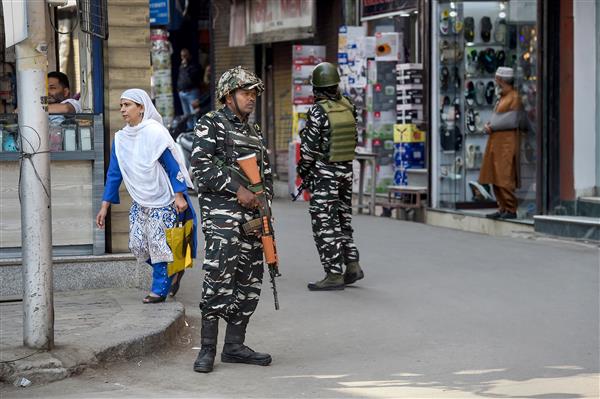 CRPF personnel stand guard at a market in Srinagar. PTI/Tribune

Union Home Minister Amit Shah arrived here on Monday on a three-day visit to J&K. Shah arrived in the evening and was received at the airport by Lieutenant Governor Manoj Sinha and Union Minister Jitendra Singh, among others. He is scheduled to meet various delegations, including those representing the Gujjar, Bakerwal and Pahari communities during his visit, officials said.

The BJP has promised the scheduled tribe (ST) status to Paharis, a long-pending demand of the community mostly residing in Rajouri and Poonch in the Jammu region and Baramulla in north Kashmir, where Shah is scheduled to address public rallies over the next two days. Gujjars and Bakerwals have expressed resentment over the proposed inclusion of Paharis in the ST category.

Meanwhile, a thick security blanket comprising different agencies, including the Army, the CRPF and the police, has been in place in the UT. Keeping in view the terror threat, the intelligence agencies and security forces are not leaving any stone unturned. Army men have been deployed in Rajouri where Shah is scheduled to address a rally tomorrow.

Shah is scheduled to address two rallies, one in Rajouri of Jammu on Tuesday and another in Baramulla of Kashmir on Wednesday. There have been two major terrorist attacks in Jammu and Kashmir over the past week. Officials said a multi-tier security arrangement has been put in place and drones are being used for aerial surveillance as well.

The checking on Jammu-Poonch and Srinagar-Baramulla highways has been intensified, while additional police and paramilitary personnel have been deployed to keep a close watch on the situation, officials said.

DGP Dilbag Singh, who visited both the venues last week, said attempts were being made by terrorist and their handlers to disrupt peace in Jammu and Kashmir but all necessary security arrangements were in place for the high-profile visit.