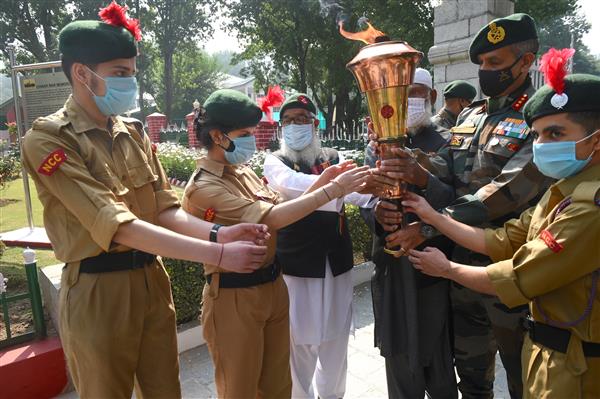 The Army on Friday said it was encouraging to see an overwhelming response from people in Kashmir to the ‘Swarnim Vijay Mashaal’ — the victory flame to celebrate India’s victory over Pakistan in the 1971 war — as the force paid floral tributes to soldiers who laid down their lives for the country.

Army officers and war veterans, led by General officer Commanding (GoC), 15 Corps, Lieutenant General DP Pandey, paid their tributes in front of the victory flame which was kept at the war memorial at the headquarters of the 15 Corps at Badamibagh Cantonment here.

The victory flame was lit by Prime Minister Narendra Modi on December 16 last year. It reached Badami Bagh Cantonment, the headquarters of the Army’s 15 Corps, on July 12.

Lieutenant General DP Pandey noted it was encouraging to see an overwhelming response from the people in Kashmir to the victory flame as it was carried around several places in the Valley, including in the Srinagar city.

“As a mark of solidarity, roadside events were organised by citizens and local NGOs at Lalded hospital, Iqbal Park, Pratap Park, Jogger's Park and Rajbagh to pay homage to the victory flame,” he added.— PTI

People from all walks of life thronged in thousands to pay their respect to this honourable flame. I indeed want to convey my gratitude to all. DP Pandey, Lieutenant General