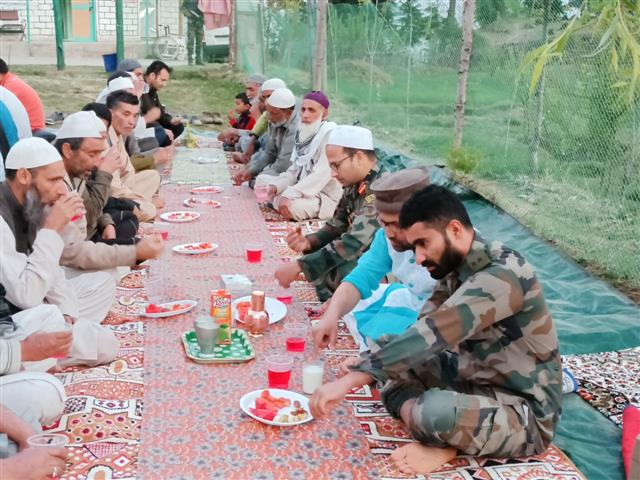 An iftar party organised by the Army in Doda district. Tribune photo

Besides securing the borders and ensuring internal security in J&K, the Army these days has been busy holding iftar parties and other events for people in far-off villages. Inviting locals, especially the Muslim community, for served food and refreshments brings people and security men close which subsequently helps the security establishments build intelligence network.

Such parties had almost been halted for the past two years due to the Covid pandemic. Iftar parties had started with the onset of holy month of Ramzan on April 2. An iftar party was hosted at Aripanthan village in Budgam district by the Army in which 52 people took part on April 8. Another such event was hosted at Warsun in Kupwara. Even local police officials were present during the event in which Army personnel highlighted the need for peace in the region.

According to the Army, during a similar event in Handwara, an unfortunate incident occurred on April 7 at the Jamia mosque when Army personnel asked some local men to click pictures inside the shrine to “showcase the peaceful and joyful” environment, but it turned into a brawl. As per Srinagar-based Army spokesperson Colonel Emron Musavi, troops of 21 Rashtriya Rifles took a few photos of the mosque and requested a local to get few photos from inside when some rogue elements protested and instigated others to get into an altercation with the troopers. Two civilians sustained bullet injures due to “accidental” firing by troops. Similar outreach exercise is being held by the Army in several villages across Kashmir division. An iftar party was held in Gundna village of Doda district.