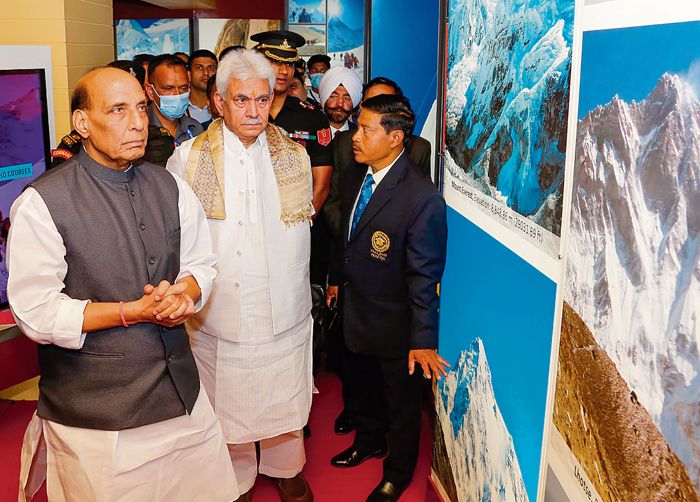 Rajnath Singh at the inauguration of a museum at the Jawahar Institute of Mountaineering and Winter Sports in Pahalgam. PTI

Defence Minister Rajnath Singh today said Assembly elections in J&K were likely by the year-end. The Delimitation Commission has completed its process and Jammu seats have been increased from 37 to 43 and Kashmir’s from 46 to 47, he said.

It comes two days after the Election Commission initiated the revision of UT’s electoral rolls and prepare the draft rolls by August 31. During the revision exercise, people will have the opportunities to enrol, delete and change their particulars in the electoral rolls.

We will not allow anyone to trigger forced migration of any community. —Rajnath Singh, defence Minister

At an event to celebrate the 200th year of coronation of Maharaja Gulab Singh, the Defence Minister, without naming Pakistan, claimed that the targeted killings in Kashmir had been a foreign conspiracy. “We will not allow anyone to trigger forced migration of any community from any part of J&K. No one, including Hindus and Muslims, will have to migrate due to any fear,” he said.

Mentioning about the contributions of Dogra rulers, especially Maharaja Gulab Singh, Rajnath said the Dogra community had made a great contribution to nation-building. “Gilgit-Baltistan, which was included in J&K by Maharaja Gulab Singh, has been illegally occupied by Pakistan. Pakistan-occupied Kashmir and Gilgit-Baltistan are a part of India and will always remain,” Singh said. “We had stated it in our manifesto that Article 370 will be removed when we attain power and we did so,” he said. The Defence Minister expressed surprise that that there were many laws that were not applicable in J&K before the abrogation of Article 370.