4 soldiers killed in suicide attack at J-K's Rajouri army base; 2 terrorists gunned down : The Tribune India

Another rifleman, who was injured while fighting terrorists in Rajouri, succumbed to injuries late on Thursday evening, taking the toll in the attack to four.

Earlier, three soldiers, including a Junior Commissioned Officer (JCO), were killed and three others, including Malik, were injured when two suicide bombers tried to gain entry into an Army post in Parghal area of Darhal in Rajouri district. The two terrorists were also shot dead in an encounter that ensued. 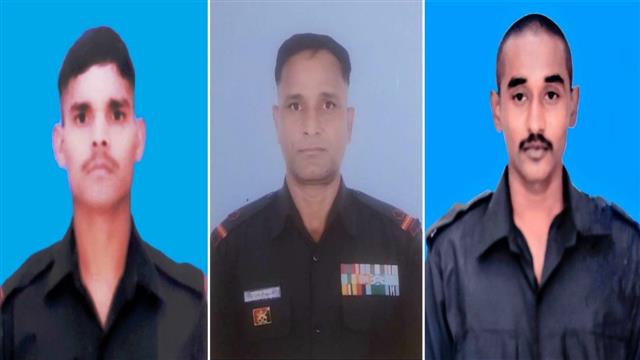 The incident occurred in early hours of Thursday when alert sentries of the Army post detected suspicious persons approaching their post taking advantage of the inclement weather and dense foliage.

“The sentries challenged the two terrorists who threw grenade while attempting to gain entry inside the post. However, troops cordoned the area and engaged them in a firefight, thereby pinning them. In the ensuing encounter, two terrorists were neutralised. Six soldiers of the Army were injured in the operation, out of which three bravehearts succumbed to their injuries while repulsing the suicide attack by terrorists,” Army PRO Lt Col Devender Anand informed.

The injured were immediately evacuated and taken to the Army hospital where three of them succumbed.

Police were also informed about the incident, after which teams of the Special Operation Group were sent in the area to cordon it off. The Police and Army were already on high alert after intelligence inputs regarding movement of two suspects in Darhal area.

Mukesh Singh, Additional Director General of Police, Jammu, said, “As reported by 11 Raj Rifles, someone tried to cross the fence of the Army camp at Parghal. Sentry challenged and an exchange of fire took place. Additional parties dispatched for the location which is around 6 km from police station Darhal”.

Sources informed that the terrorists were armed with AK series rifles, grenades and other arms and ammunition.