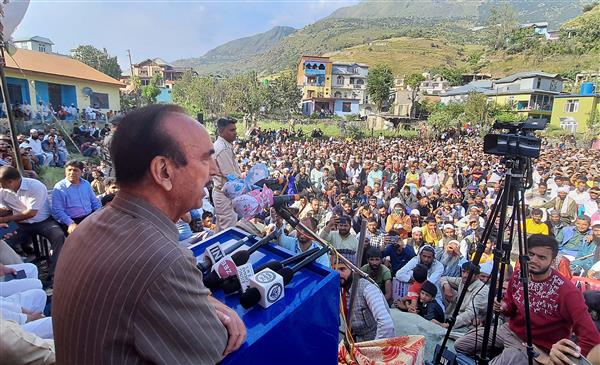 On a whirlwind tour to villages in Doda, Kishtwar and Ramban district where he faced defeat in the 2014 Lok Sabha polls, former Congress leader Ghulam Nabi Azad is banking on victim card after his exit from the Congress and the development work in the erstwhile state of J&K when he was the Chief Minister for a half and two years.

Criticising the Congress heavily, he has been accusing it of ignoring and humiliating senior leaders. At a rally in Jammu, he said that he gave decades to the party but was sidelined later.

At the same time, his silence on the policies of the BJP is being questioned by many. In his public meetings and rallies, he highlights the works he undertook as the J&K CM, such as the road network in far off areas, construction of Tulip Garden in Kashmir, golf course in Jammu, new colleges and hospitals, etc.

Even as Doda district is his hometown, Azad won in the Assembly polls from Bhaderwah constituency in the district only once, that too in 2006 when he contested as a sitting CM. His security deposit was forfeited when he first contested from the Inderwal Assembly constituency in Doda in 1977.

Azad is also leaving no stone unturned to woo the Hindu population in the Udhampur Lok Sabha constituency that includes Doda and Kishtwar districts among others as he had faced an embarrassing defeat at the hands of BJP’s Jitendra Singh in the 2014 polls by over 60,000 votes.

During a recent rally in Doda, Azad said, “There are many villages where Hindus are in majority. But I do not differentiate on the basis of religion as God has made everyone same. I have never discriminated against anyone as there is no area in the region where I have not come when I was the CM.”

Playing the victim card, Azad said, “This is for the first time I have come here without any position. During my earlier visits, I was either Member of Parliament, Union minister or CM. But I feel content as people from different community are supporting me.” During his recent Jammu rallies, he did not demand restoration of Article 370 or special status, but strongly pitched for statehood restoration.

Many Congress leaders, including former ministers and MLAs, have already deserted the Congress to join Azad who is expected to announce a party soon.

While supporters of Azad are boasting of these new joining, most of these leaders who joined Azad had lost in the 2014 polls. These were the last Assembly elections J&K had witnessed.

Residents of Doda and Kishtwar say the gathering at Azad’s rallies has been impressive. Other parties have witnessed workers and leaders going to Azad’s camp in recent times.

Eye on voters of Jammu region