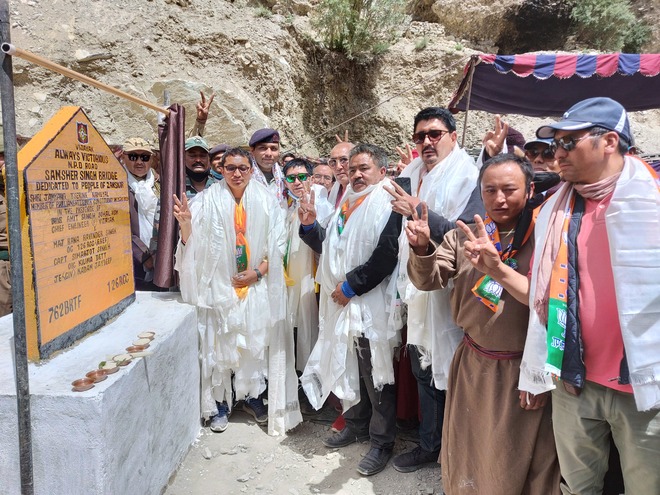 Member of Parliament from Ladakh Jamyang Tsering Namgyal inaugurating a bridge on the Zanskar river.

Member of Parliament from Ladakh Jamyang Tsering Namgyal inaugurated a bridge on the Zanskar river.

With the inauguration of the bridge on the Zanskar river in the Chorten Rangjon area, the people of Zanskar can reach Leh via the Singay La in 10 hours. Earlier, people of Zanskar had to cover 440 km via Kargil and it took almost two days to reach Padum, the capital of Zanskar, but now the distance is reduced by 160 km. This bridge will benefit number of villages, including Photoksar, Lingshed, Yulchungs, Nyeraks and Skumpata, which remain cut off from Leh city during winter months.

Expressing their immense pleasure over the completion of Shamsher Singh Bridge on the Zanskar river, residents of Zanskar gave a warm reception to the Ladakh MP on his arrival in Zanskar.

The Ladakh MP assured the Zanskar residents of blacktopping the Wanla-Lingshed-Padum road, which connect Leh and Zanskar via Shamsher Singh Bridge, within two years.