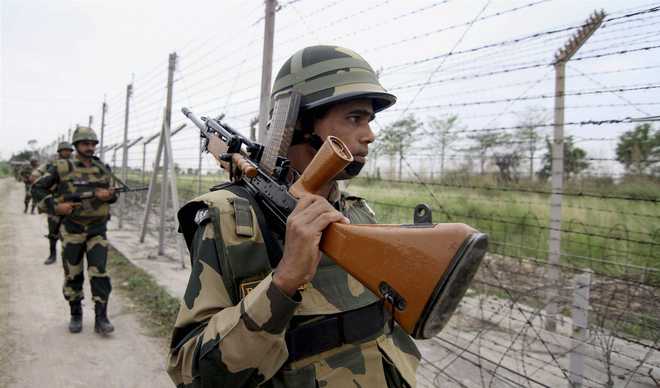 Border Security Force (BSF) foiled an infiltration bid from Pakistan side along the International Border (IB) in Samba sector during the intervening night of September 14 and 15.

According to the BSF, troopers tracked the movement of a group of five militants in the Pakistan side of international boundary of Samba sector.

“At about 12.30 am, the group of heavily armed five terrorists was seen by alert BSF troops close to international boundary in Pakistan sides where they reached taking advantage of undulating ground and thick wild growth.  Terrorists took refuge in a depression having dense wild growth,” a spokesperson said.

The spokesperson said all nearby BSF duty points were alerted and the BSF troops challenged them to stop.

The area was illuminated by help of parabomb and BSF troops saw the miliatnts fleeing toward the Pakistan side, he said, adding: “The area was searched but nothing recovered as terrorists could not cross the IB”.

The spokesperson said a strong protest is being lodged with Pakistan Rangers for helping militants infiltrate the Indian border.

The incident came a few days after the Director General (DG) of BSF Rakesh Asthana visited different Border Out Posts (BOPs) in Samba sector on September 5. Asthana had visited the site where the BSF had detected a tunnel of approximately 25 feet deep and about 3-4 feet in diameter in Indian Territory near border fencing in Galar area of Samba sector on August 28.

J&K Director General of Police (DG) Dilbagh Singh who also visited Galar area on September 13, said that Pakistan was using cross-border underground tunnels to push militants into India and drones to drop weapons for them.