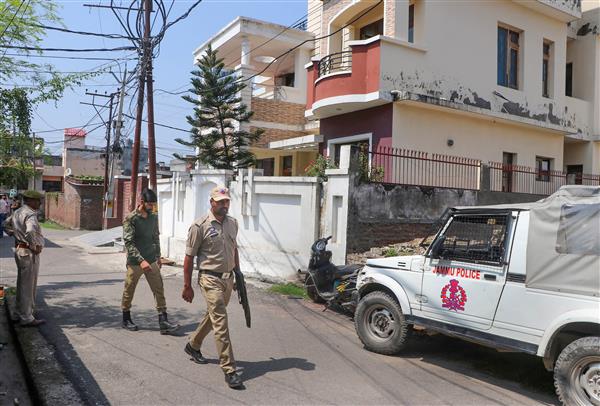 Cops outside a house during a CBI search in Jammu on Tuesday. PTI

The CBI on Tuesday said it had conducted searches at around 36 locations in four states and two Union Territories (UTs) as part of its ongoing investigation in a case relating to the alleged irregularities in the recruitment of sub-inspectors (SIs) in the J&K Police. The search was conducted in Jammu, Srinagar, Karnal, Mahendragarh, Rewari, Delhi, Ghaziabad, Bangalore and Gandhidham (Gujarat).

In an official statement, CBI spokesperson RC Joshi claimed that the probe so far revealed that Rs 20 to 30 lakh was paid by candidates and their families to the accused for accessing the question paper before the commencement of the examination. “Role of a Haryana gang, certain J&K teachers, some serving and retired personnel of the CRPF, the J&K Police and the J&K Services Selection Board has allegedly come to light,” he said.

According to the CBI, today’s raids are the second biggest crackdown in the scam.

A senior CBI official said the premises of former JKSSB chairman Khalid Jahangir in Srinagar and Controller of Examinations Ashok Kumar in Jammu were also searched. “Incriminating documents and digital evidences have been seized,” Joshi said.

A few months ago, after the selection list of 1,200 SIs was issued, there were allegations of large-scale corruption in the recruitment process.

“It was alleged that the accused colluded with officials of the JKSSB, Bengaluru-based private company, beneficiary candidates and others, causing gross irregularities in the examination. It was further alleged that there was an abnormally high percentage of selected candidates from Jammu, Rajouri and Samba,” the CBI has said.

“Violation of rules by the JKSSB” was found in assigning the task of setting the question paper to a Bengaluru-based private company.

The CBI had earlier conducted searches on August 5 at 30 locations after registering an FIR in August this year.