Cente reaches out to workers in Ladakh areas 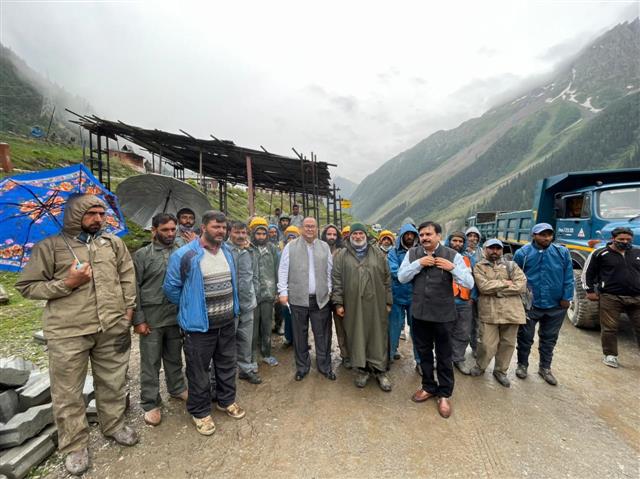 The Labour Ministry is also reviewing the status of the campaign of sensitisation about the labour laws and Codes.

The Union government has made an outreach to workers at Zojila Pass, Kargil and Dras in the UT of Ladakh to review their working conditions and implementation of labour laws and new labour Codes.

The Labour Ministry is also reviewing the status of the campaign of sensitisation about the labour laws and Codes.

The Chief Labour Commissioner and Labour Bureau Director General DPS Negi touched down in the areas of Ladhak and held separate meetings with workers contracts, and the officials of Border Roads Organisation (BRO) and National Highway and Infrastructure Development Corporation (NHIDCL) and others stakeholders, including local stakeholders, today.

In fact, this is for the first time that a high ranking officer from the Centre has physically touched base in the far flung, difficult terrain of the country to get first hand feedback.

During his separate meetings with officials and contractors, he underlined the importance of implementation of labour laws and the new labour codes.

Negi, who landed in Ladakh yesterday, will visit Leh tomorrow.

A functionary of the Labour Ministry said: “During the meeting with officials, the Chief Labour Commissioner spoke at length about how compliance with new labour codes is a win-win situation for both the employees and the employers.”

BRO of Indian Armed Forces and NHIDCL of the Union Road Transport and Highways Ministry, among others, are engaged in construction of strategic roads and infrastructure in the areas bordering China.

Construction workers from other States, including Jharkhand and Bihar are engaged in large numbers regarding the road projects.

During the meetings, Negi enquired about the prevailing labour issues at their project sites. He also studies different activities undertaken there.

During his meeting with workers at the Zojila Tunnel site, he took note of their peculiar problems, working in the far-flung hilly terrains of the country.

The workers urged Negi to fix higher wages for them considering the challenging conditions of their job in a hostile terrain.

He explained to them the benefits of Union government schemes, both for the workers in the organised as well as unorganised sector.

Negi elucidated how compliance with new labour codes is a win-win situation for both the employees and the employers.

He requested the workers to apply and get their labour cards made, as also to register themselves in the NDUW portal, which will be launched by Labour Ministry soon.

Negi made them aware about their rights, and assured them that the government is sensitive towards their welfare, safety and security.

He complimented them for serving the country in such harsh conditions, rendering yeoman’s service for nation building.