14 persons, including five from minority communities, killed since Oct 1 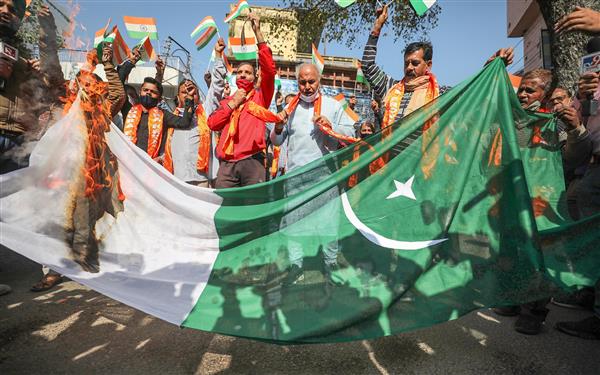 Residents during a protest against Pakistan in the wake of civilian killings, in Jammu. PTI

Amid a spike in targeted civilian killings by terrorists in Kashmir, over 5,500 additional Central Armed Police Forces (CAPFs) personnel have been sent to the Valley, officials said on Tuesday. The fresh companies were moved as part of the strategy of “enhancing security and visibility” of the forces on the ground following the killings. The Union Home Ministry had last month directed that about 55 fresh companies of the central forces should be deployed in Kashmir. The last five companies of this lot will be in position by next week, they said.

While 25 of these companies are drawn from the CRPF, the rest belong to the BSF. A CAPF company has about 100 personnel. The CRPF is extensively deployed in J&K with around 60 battalions, comprising about 1,000 personnel each, based in Kashmir as regular deployment in Srinagar and other parts of the Valley.

The BSF guards the India-Pakistan Line of Control (LoC) under the operational command of the Army and some of its units are deployed for law and order duties in the towns too. New bunkers have emerged in the Valley as people were being frisked and vehicles scanned by the central and state police personnel.

At least 14 people have lost their lives since October 1 in shootings that targeted civilians. Five of those killed re labourers from Bihar, while three, including two teachers, belonged to minority communities in the Valley.

Officials say 112 terrorists have been killed and 135 apprehended in the UT this year by the CRPF and other security forces during joint operations.

PDP president Mehbooba Mufti says the situation has deteriorated as innocents are getting killed despite the government’s “repressive measures” in the name of security.