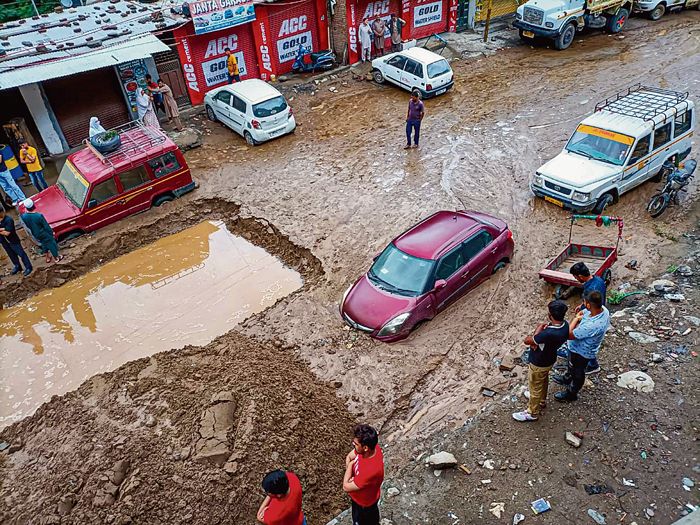 Vehicles stuck in slush on a damaged road after the cloudburst in Thathri on Saturday. PTI

Flash floods and mudslides, caused by a cloudburst, left a few vehicles and buildings damaged in Thathri area of Doda district on Saturday. There was no report of loss of life. Several major roads, including the highway and those connecting Thathri to other areas, got clogged due to the slush the floodwaters brought along. Vehicles parked alongside roads got stuck. Men and machinery were immediately pressed into service to remove the boulders and slush from the roads. The roads were cleared for traffic by evening.

Doda Deputy Commissioner Vikas Sharma said no loss of life was reported. He said officials concerned had been directed to ensure uninterrupted essential service delivery to the locals and to throw open all the major link roads.

Sharma also directed officials, including Thathri SDM, to camp in the area to monitor the restoration round the clock and to deploy all the men and machinery so that all the major link roads affected are thrown open by evening. A report on damages to the property has also been sought by the DC.

The incident occurred at around 4 am when there was no movement of vehicles on the roads in the area otherwise it could have worsened the situation, said residents.

Jammu Divisional Commissioner Ramesh Kumar tweeted that no loss of life was report and the administration was working to restore essential services. The roads were made motorable by evening, he informed.

Meanwhile, the Ramban administration has advised people to remain alert due to incessant rainfall in the region. Announcements were also made from mosques, temples and other religious establishments, urging the people to stay away from rivers, nullahs, low-lying areas and avoid unnecessary travel. The people were urged to inform the administration in case of any exigency.

The SDRF men and the quick response teams have been asked to keep their rescue equipment ready.