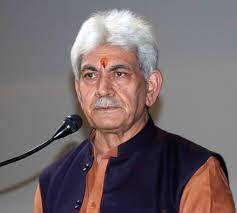 Jammu and Kashmir Lieutenant Governor Manoj Sinha on Tuesday directed the Public Works Department to complete on priority ongoing projects along the twin routes of the Amarnath Yatra.

The 56-day yatra to the 3,880-metre-high cave shrine in the south Kashmir Himalayas is scheduled to start on the twin routes of Pahalgam in Anantnag district and Baltal in Ganderbal district on June 28. Sinha issued the direction while reviewing the progress of projects being executed by the PWD (Roads & Buildings) on the Amarnath Yatra routes so that all services are ready well before the start of the annual pilgrimage, an official spokesperson said.

Sinha also directed officers concerned to ensure that accommodation facilities for pilgrims in Ramban along the Jammu-Srinagar national highway are enhanced by May-end, he said.

Meanwhile, Divisional Commissioner, Jammu, Raghav Langer visited the Yatri Niwas at Bhagwati Nagar and inspected arrangements there. The divisional commissioner took a round of the complex and directed the Tourism department to immediately start renovation and maintenance work there, the official said. He asked for building a shed over an adjoining vacant plot of land with all basic facilities like power and water supply, mobile toilets and charging points to augment the existing accommodation capacity, the spokesman said. — PTI