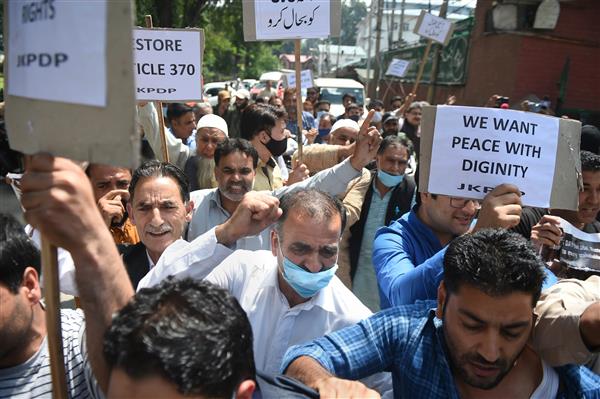 PDP workers hold a protest demanding the restoration of the special status of Jammu and Kashmir on the third anniversary of abrogation of Article 370 and 35A in Srinagar on Friday. PTI

The People's Democratic Party and the Congress staged protests on Friday to mark the third anniversary of the repeal of Jammu and Kashmir's special status and reiterated their resolve to fight for its restoration.

The National Conference held a meeting on the occasion and pinned all its hopes on the Supreme Court reversing the decisions taken by the Centre on this day three years ago.

However, it was like any other normal day in Kashmir as hundreds took part in government functions to celebrate the third anniversary of the abrogation of Article 370 and its corollary Article 35-A.

Children spent their day in schools and reached home safely as pelting of stones, street protests and shutdowns have become a thing of the past now. Schools in Kashmir faced no shutdowns after a long time and are open since March after remaining shut for nearly three years due to long curfews, security situation and Covid-19 restrictions.

Our party is determined not only to fight for the restoration of the special status of J&K, but also work for a lasting solution to the issue of Kashmir. —Mehbooba Mufti, PDP chief

Aug 5, 2019, marks breach of trust, decisions not acceptable to us. We hope the SC will reverse the unilateral, undemocratic and unconstitutional decisions. —Farooq Abdullah, NC president

Shops, businesses, and offices remained open and the transport was plying normally across Kashmir. However, parts of old city Srinagar and Maisuma, the native place of Jammu and Kashmir Liberation Front (JKLF) leader Yasin Malik, remained shut. This has come at a cost as hundreds of separatists and their sympathisers have been put in jails or threatened into silence, pushing the idea of separatism into oblivion. All former CMs — Farooq Abdullah, Omar Abdullah and Mehbooba Mufti — have been summoned by the ED in different cases.

The ruling BJP at the Centre indicates it doesn’t want independent regional leadership and would prefer to have its own people to replace the old leadership in Kashmir.

BJP leader and former minister Priya Sethi said J&K was on the path of development because of the reformist leadership of Prime Minister Narendra Modi at the Centre.

With India and Pakistan reaffirming the ceasefire agreement along the LoC, security forces have launched a major assault on militants by killing nearly 500 of them, mostly locals in the past three years. — Agencies

New Delhi: Even as officials in the security establishment have claimed that the situation has improved since August 5, 2019, experts say concerns remain as militants have struck recurrently to register their presence by targeting civilians, including those belonging to minorities and outsiders. However, security forces are facing newer challenges in the form of ‘lone wolf attacks’ and ‘hybrid terrorists’ in the Valley, as they are mostly indulging in targeted attacks, officials said.