People angry as BJP not protecting their rights, says Congress 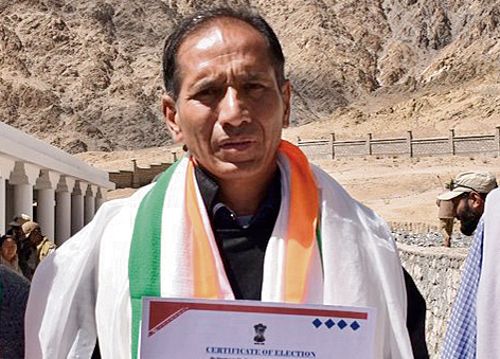 Congress' Tashi Tundup after his bypoll victory in Ladakh.

The Congress has defeated the BJP by a margin of 273 votes to win the crucial Ladakh Autonomous Hill Development Council (LAHDC), Leh, bypoll for the Timisgam constituency. Many senior BJP leaders had canvassed for the saffron party’s candidate.

Congress candidate Tashi Tundup got 861 votes and BJP's Dorjay Namgyal was able to bag only 588 votes. As many as 14 NOTA votes were cast and four votes were rejected. The victory margin of 273 votes is significant as only 1,467 votes were cast on September 13.

Out of the total 30 seats in the LAHDC, the BJP had won 15 in the 2020 elections. The Congress had won nine, including the Timisgam seat, and two seats went to Independent candidates. Four members are nominated. The seat had fallen vacant due to the death of councillor Sonam Dorjey.

It was a direct contest between the BJP and the Congress as the nomination of the AAP candidate was rejected and there was no other candidate in the fray.

A victory procession was taken out by the Congress in the constituency where many supporters joined the winning candidate. The BJP was confident of victory at Timisgam as party's Ladakh MP Jamyang Tsering Namgyal and other senior leaders, including Chief Executive Councillor Tashi Gyalson, had campaigned day and night for the elections.

Nawang Rigzin Jora, former minister in the erstwhile J&K state and senior Congress leader from Ladakh, said people were angry with the BJP-led Centre as it has not been able to protect their rights.

As soon as the report of the Congress’ win reached the national capital, top Congress leaders started a social media war against the BJP. “Here is some breaking news for Modi, Shah and Azad. The Congress has defeated the BJP by a convincing margin in the Timisgam byelection,” wrote former Union Minister Jairam Ramesh.