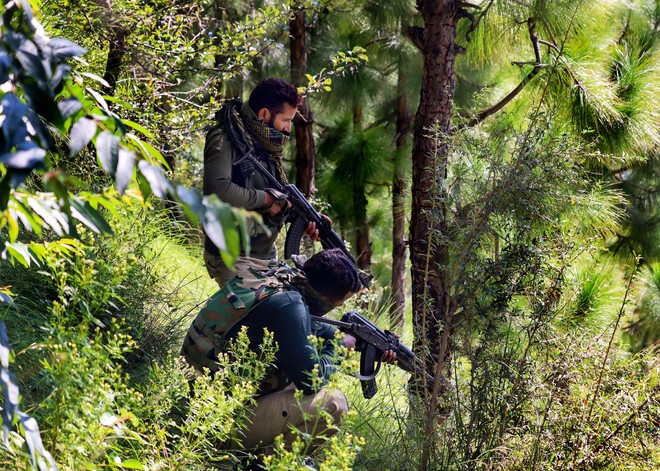 Security personnel near the site of an encounter at Nar Khas area of Mendhar in Poonch district on Tuesday. PTI

After suffering nine casualties in as many days, the Army has upped the ante against the terrorists holed up in the jungles of Poonch in the Jammu region, asking locals not to venture out of their homes and blocking main roads for a full-scale operation, officials said.

The area where the operation is currently going on falls under XVI Corps of the army, also known as 'White Knight'.

The operation to neutralise the holed-up terrorists intensified on Tuesday with authorities asking people in Mendhar in Poonch to stay indoors for their safety.

The people were alerted through the public address system in local mosques in Bhatta Durrian and adjoining areas as the security forces were preparing a final assault against the terrorists believed to be hiding in the forest area, the officials said.

The deafening sounds of explosions and gunfire shook the forest area shortly after the announcements with security forces launching assaults on suspected locations, mostly natural caves. However, there was no immediate report of any casualty.

A Junion Commissioned Officer (JCO) and four other security personnel laid down their lives in a fierce gunfight during the start of the counter-insurgency operation in Surankote forest of Poonch on October 11 and four other soldiers including another JCO lost their lives in another encounter in Nar Khas forest in Mendhar on Thursday evening. — PTI