CRPF DIG among two killed in landslide on Jammu-Srinagar NH 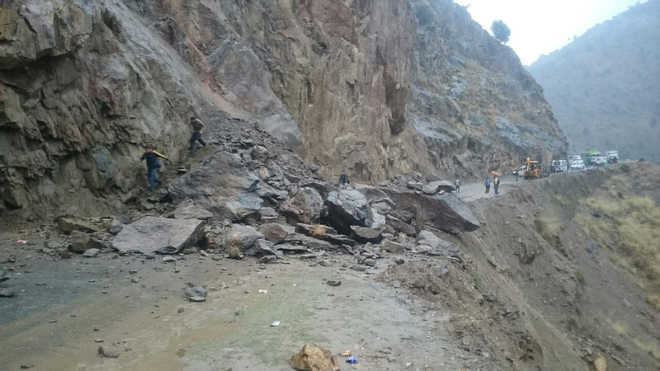 A deputy inspector general of the CRPF and his driver were killed while his personal security officer was critically injured when their vehicle was hit by a landslide along the Jammu-Srinagar National Highway in Ramban district on Sunday, officials said.

The landslide struck the vehicle near Khooni Nallah this evening while DIG, north Kashmir, Shalinder Kumar Singh was moving along with his escort towards the Valley, they said.

The highway was closed for traffic since Thursday evening following heavy snowfall in Jawahar Tunnel and adjoining areas and multiple landslides between Ramban and Ramsu.

The road was cleared of the debris late in the afternoon and some vehicles, including that of the DIG, were allowed to pass on priority, the officials said.

While the officer’s vehicle was crossing the slide-prone area, huge boulders at Digdol area rolled down from the hillock overlooking the highway, crushing his vehicle.

They said rescuers immediately swung into action and managed to pull out bodies of the DIG and his driver.

His personal security officer Mohammad Sharief Khan, a resident of north Kashmir’s Uri, was taken to the Ramban district hospital where his condition was critical.

He was later referred to the Army Hospital, Udhampur for specialised treatment. — PTI