Delimitation exercise part of BJP’s plan to divide, pit communities against each other: Mehbooba

Taking to Twitter, Mehbooba said the Centre was ‘railroading’ delimitation in JK with a ‘tearing hurry’, raising serious apprehensions about the motives of the exercise 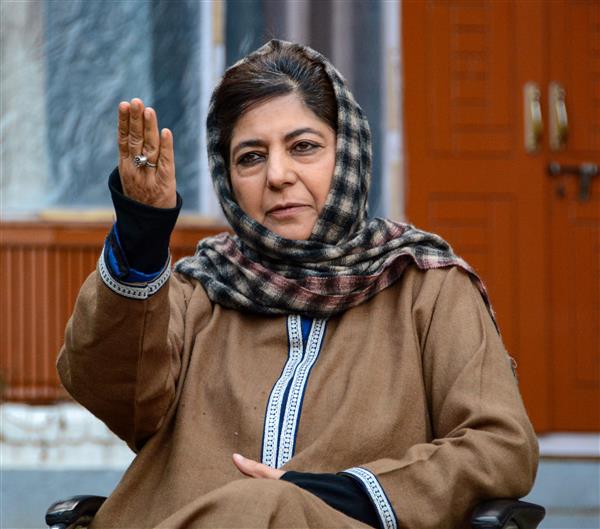 The delimitation of assembly constituencies in Jammu and Kashmir is a part of the BJP’s “larger plan to divide and pit” regions, religions and communities against each other, PDP president Mehbooba Mufti alleged.

Taking to Twitter, Mehbooba on Sunday said the Centre was “railroading” delimitation in Jammu and Kashmir with a “tearing hurry”, raising serious apprehensions about the motives of the exercise.

“The tearing hurry with which GOI (the Government of India) is railroading delimitation in J&K has raised genuine & serious apprehensions about the motives of this exercise. It’s a part of BJP’s larger plan to divide & pit regions, religions & communities against each other,” she said.

The Delimitation Commission for Jammu and Kashmir was constituted by the Centre on March 6, 2020.

The commission held its first meeting on Thursday to seek suggestion/views on the process of delimitation in respect of the Union Territory.

The meeting of the commission was attended by two of the five associated members — Union Minister Jitendra Singh and BJP leader and MP from Jammu, Jugal Kishore Sharma.

The tearing hurry with which GOI is railroading delimitation in J&K has raised genuine & serious apprehensions about the motives of this exercise. It’s a part of BJPs larger plan to divide & pit regions, religions & communities against each other. https://t.co/dbxxi1octD

The other three associated members of the commission — National Conference MPs Farooq Abdullah, Mohammad Akbar Lone and Hasnain Masoodi — did not attend the meeting.

The NC MPs informed the commission that they would not be participating in its proceedings as the abrogation of Jammu and Kashmir’s special status was pending adjudication before the Supreme Court.

In a letter to Chairperson Delimitation Commission Justice (Retd) Ranjana Prakash Desai, they expressed their inability to associate with the commission.

They also urged the chairperson not to go ahead with the delimitation process as the JK Reorganisation Act, 2019, is under judicial scrutiny in the Supreme Court.

“In our view, the Jammu and Kashmir Reorganisation Act, 2019, is palpably unconstitutional and has been enacted in disregard and violation of mandate and spirit of the Constitution of India and therefore, not to be acted upon,” the MPs said.

“We have thrown challenge to constitutional validity of the Jammu and Kashmir Reorganisation Act, 2019, exercise of powers where-under the meeting in question is proposed to be held,” they said. PTI