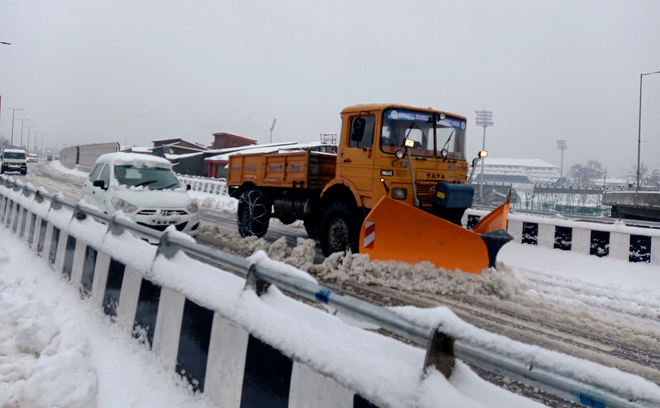 A snow cutter cleans snow from Flyover in Srinagar.

Air traffic to and from Kashmir was restored on late Saturday afternoon after several flights were cancelled in the morning due to fresh snowfall in Srinagar and some other parts of the Valley, officials said.

“The flight operations resumed at the airport late afternoon and many flights arrived and departed from here,” an official of the Airports Authority of India said. He said air traffic was restored after weather improved in the Kashmir valley and the runway at the airport was cleared off the snow.

Earlier in the morning, the flight operations were affected because of accumulation of snow on the runway.

Several flights were cancelled, while many others were delayed due to bad weather and poor visibility.

The air traffic to and from the Valley was also affected earlier this week. It remained suspended for four days from Sunday the wake of heavy snowfall and was restored on Thursday.

Srinagar and some other parts of Kashmir received fresh snowfall on Saturday and minimum temperature dropped across the Valley, officials said. The fresh snowfall began early in the morning.

There were no reports of snowfall at the famous ski-resort of Gulmarg in north Kashmir and Pahalgam tourist resort in the south.

The MeT office had forecast very light rain or snowfall at isolated places in Jammu and Kashmir on Saturday, even as it had said there was no forecast of any major snowfall. It had said the weather was likely to stay mainly dry till January 14.— PTI