Dwindling number of double-humped camels in Ladakh : The Tribune India 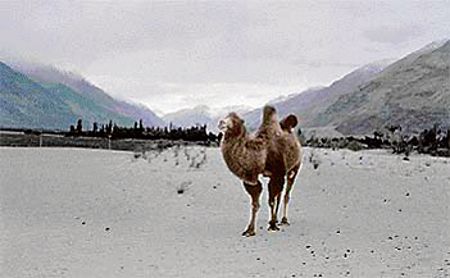 The Bactrian or double-humped camel, the last remnants of the Silk Road trade in India, are dying due to lack of medicine and adequate food in the cold desert of Ladakh. At least 15 animals died since January last, camel owners said.

Over the years, the government has failed to provide medicine and adequate food for camels in Ladakh, where vegetation is sparse due to high aridity, said Haji Ali Muhammad of Hundar village in Nubra district of Ladakh. He said their number went down to 150 from 250 in 2018. Chief Animal Husbandry Officer, Leh, Dr Muhammad Iqbal refutes the figure, saying the number is 296.

With the closure of the Silk Route in the 1950s, a few Bactrian camels used for carrying heavy loads from China were abandoned by traders in Nubra Valley in Ladakh.

Overlooked and uncared for, their numbers dwindled, pushing them to the brink of extinction in the country. From six camels in 1962, the number had gone up to 250 in 2017, thanks to the residents of Hunder village in Nubra Valley in Ladakh who used them for camel safaris since 2003.

The camel safari in the white sand deserts of Hunder and Diksit or along the picturesque Shook river in the Nubra valley is a big attraction for tourists.

“These camels have survived even after the closure of traditional silk route but it seems in the era of digital silk route which China is making they won’t survive anymore. No one even in our government is concerned about their conservation,” said another local, Muhammad Yusuf.

Also, the deaths of these camels have badly affected the livelihood of people who were associated with the business of camel safari in the remotest region of India.

“Our livelihood depends on these camels but unfortunately the government is least bothered about it,” said Muhammad, who owns three Bactrian camels.

The government is not identifying separate pastures for these camels, making them vulnerable to attacks from local farmers, he said.

Iqbal said the government had provided two trucks of feed to villagers for these camels recently but asked the owners to spend the money they earn from them on their well-being.

Villagers say Bactrian camels went down to 150 from 250 in 2018, but Chief Animal Husbandry Officer, Leh pegs the figure at 296.